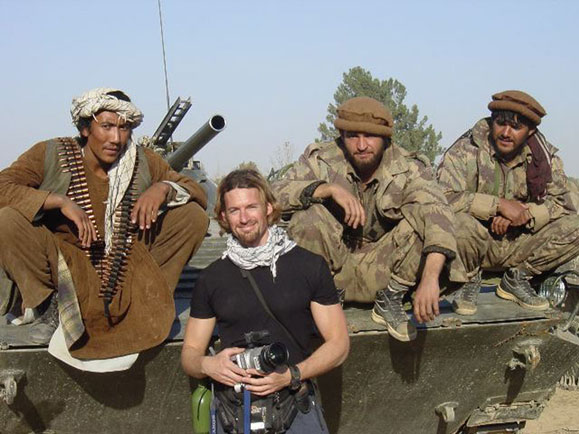 Kevin Sites, former correspondent with ABC, CNN and NBC, and recipient of the Daniel Pearl Award, will share stories of people and places from the world’s combat zones as the first presenter when UBC Okanagan’s Distinguished Speaker Series resumes in January.

Yahoo’s first news correspondent, Sites blends the best of traditional reporting with cutting-edge reporting tools, using portable digital technology to shoot, write, edit and transmit multimedia reports. In 2006, beginning in Somalia and ending with the Israeli-Hezbollah clash, he spent one year covering 20 war zones — practically every armed conflict in the world — for Yahoo’s award-winning site Kevin Sites in the Hot Zone. He is author of the book In the Hot Zone — One Man, One Year, 20 Wars.

His past assignments have brought him to nearly every region of the world from the Middle East to South America, from Central Asia to Eastern Europe.

Sites will speak at the Kelowna Community Theatre (1375 Water St.) at 7 p.m., Thursday, January 14, 2010. There is no charge for this event. Seats are available only by pre-registering on the Distinguished Speaker Series website (www.ubc.ca/okanagan/speakers) starting Monday, Dec. 14.

The Distinguished Speaker Series moves to the South Okanagan for World Water Week and a presentation in Penticton by Robert Sandford. A renowned expert on water conservation issues, Sandford is the Canadian Chair of the United Nations International Decade “Water for Life,” a national partnership to advance long-term water quality and availability issues in response to climate change in this country and abroad.

Sandford’s talk, Water for Life, is at the Cleland Theatre, 7 p.m., Monday, March 22, 2010. Seats are available only by pre-registering on the Distinguished Speaker Series website (www.ubc.ca/okanagan/speakers) starting Monday, Feb. 22.

The final presentation of the season is a talk in Kelowna by David Dodge, who served as Governor of the Bank of Canada from 2001 until January 2008. His presentation, Emerging from the Recession: The Road Ahead will be followed by an interactive question-and-answer session with the audience. The evening begins at 7 p.m., Tuesday, May 4, 2010, and the Kelowna Community Theatre. Seats are free but are available only by pre-registering on the Distinguished Speaker Series website (www.ubc.ca/okanagan/speakers) starting April 4.