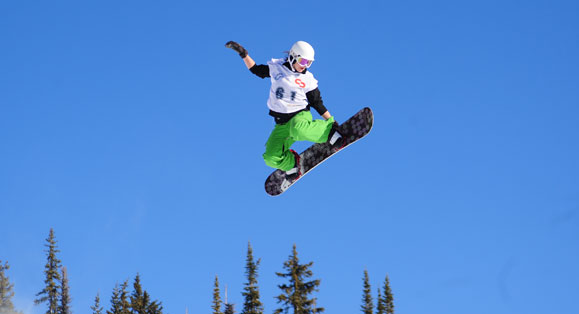 A competitive snowboarder with the First Nations Snowboard Team (FNST), Treanna Delorme will carry the Olympic torch for one kilometre in Lillooet, B.C., on Feb. 6.

The UBC Okanagan first-year Nursing student says carrying the torch is a thrilling opportunity and one she believes could further inspire her own dreams of someday representing Canada on the Olympic podium. 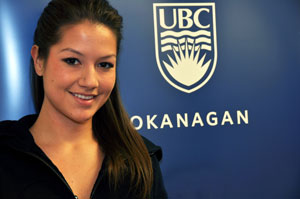 “I was so stoked when I found out I was chosen for this honour,” she says. “It’s going to be an awesome experience.”

Despite having an injury last year that kept her from competing at provincials, and consequently nationals, Delorme was ranked 33rd in Canada in her niche competition, boardercross, which requires snowboarders to race down an obstacle course, maneuvering through sharp turns and riding big jumps while at the same time avoiding collisions with fellow competitors.

“First one to cross the finish line wins,” says Delorme. “It’s pretty intense. You go full tilt, and it can get pretty physical at times.”

Delorme, who is Cree and originally from the Cowessess First Nation in Saskatchewan, has been snowboarding for about eight years. She joined the FNST three years ago after moving to Kelowna from North Vancouver. During winter months she spends countless hours on the mountain, while off-season training includes dry-land and trampoline exercises.

As a first-year student athlete, Delorme admits it can sometimes be a challenge finding balance between academics, training, competition, and maintaining a social life. However, this year she received a scholarship of $3,750 from the National Aboriginal Achievement Foundation and a $3,500 B.C. Aboriginal Student Award, which she says helped support her development and allowed her to focus on achieving her professional and personal dreams.

“The scholarships help me so much, as I was able to quit my job as a server and concentrate solely on school and snowboarding.”

Delorme trains year-round with the FNST, which is the only snowboard body in Canada run by First Nations people. Formed in 2004, the organization’s goals are to create the conditions for an Aboriginal person to win an Olympic medal in snowboarding as well as to inspire youth to increase physical activity, develop healthy habits, and achieve personal excellence.