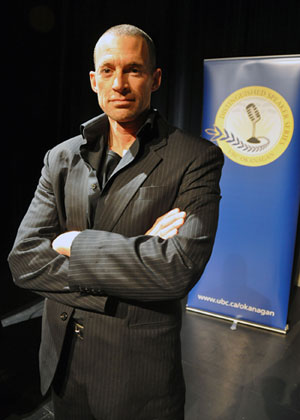 Award-winning journalist Kevin Sites spoke in very personal terms Thursday evening (Jan. 14, 2010) as he told a sold-out audience at the Kelowna Community Theatre about his experience covering every major conflict in the world during a single year.

“My idea was to swing to the fences — to put a human face on global conflict by using a multimedia approach to covering every major war in the world, all delivered on the Internet,” said Sites, who wrote In the Hot Zone — One Man, One Year, 20 Wars after serving as Yahoo!’s first news correspondent in 2006.

“(It) was the best job I ever had,” he said. “I was given an American Express media card, no limits, and told to go wherever the story was.”

Armed with a backpack of portable digital technology, Sites went into the heart of war-torn regions, frequently accompanied by bodyguards and a translator, to shoot, edit, write, report, and transmit stories often overlooked or under covered by mainstream media.

“I traveled west to east, starting in Somalia, and ending 368 days, 71 airplanes, 31 countries, 20 conflict zones, 1,300 photos, 150 dispatches, and 130 video reports later. It was a long year. My site became popular with both the public and critics, winning a dozen national and international awards, and, at its peak, drawing 2 million viewers a week.”

Sites was just 15 years old when he secured his first job as a photographer for a local community newspaper, eventually working his way into news organizations such as ABC, CNN and NBC, before making the bold move to the Internet as a Yahoo! news correspondent.

Brought to Kelowna by UBC Okanagan Distinguished Speaker Series, Sites also talked about the multiple ethical dilemmas he has faced during his career, the backlash generated by some of those decisions, and how his professional path was directly impacted by them. On one occasion, six years ago, Sites became a flashpoint of controversy when, as an NBC News correspondent, he videotaped the November 2004 shooting of a wounded Iraqi insurgent in a mosque by a U.S. Marine.

“After the report, I begin receiving hundreds of hate mails and death threats, many calling me a traitor,” said Sites.

Although vilified as a traitor to both the Marine unit that embedded him and his country, Sites was simultaneously praised as a journalist willing to reveal the harsh realities of war. For his television and web coverage of the story, Sites was honored with the 2005 Payne Award for Ethics in Journalism and was nominated for a national Emmy Award, his second such honour.

“While I’ve spent much of my career neck-deep in the misery of others, this work has imparted a deep sense of humility and empathy that reminds me of my privilege and the profound personal truth that a life of telling other peoples stories has been the most enriching way to live my own,” said Sites of his career.

Sites ended the evening’s presentation sharing with the audience some lessons he learned reporting in the heart of conflict zones.

“Ultimately, the privileges of bearing witness to the events I’ve seen have revealed several truths which turned my former perceptions about war upside down,” said Sites. “Number one: people are resilient. People are more than the sum of their misery. Seeing and reporting them only as victims prevents us from understanding the full scope of their lives.

“Number two: people’s resilience does not absolve us from seeking those long-term solutions as well as immediate assistance for those impacted by conflict.

“And finally, and perhaps most importantly, throughout history we have mistakenly defined war as its smallest and most fleeting feature – combat — when we should define it by its largest and most enduring feature — collateral damage, or the destructions of civil society. Battles may only last hours or days, but civil destruction of fighting endures for generations.”