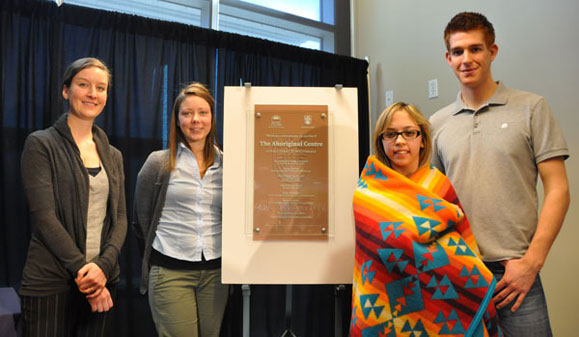 The Aboriginal Centre at UBC Okanagan was officially opened on January 22, 2010. The 256-sq.m. (2,756 sq. ft.) centre, made possible by $600,000 in funding from B.C.’s Ministry of Advanced Education, has been designed as a special space that reflects the cultural characteristics of the Aboriginal students who use it, says Lyle Mueller, Director of Aboriginal Programs and Services.

“UBC Okanagan initiatives such as peer support and entire programs developed for Aboriginal students are proving very successful here,” says Mueller, explaining that the new centre is the new home to a host of academic services, tutorial and peer support, along with study skills and time management workshops.

“I really like this facility,” says Tamina de Montezuma, a fourth-year social work student of Métis ancestry who works in the Aboriginal collegium. “This is a great place for students — it’s quiet, and we have cultural things that a lot of students enjoy.”

Among those cultural activities are smudges, held twice a week and led by the Centre’s spiritual coordinator Loren Sahara. Smudging is a traditional cleansing ceremony in which medicines — herbs such as sage, cedar, juniper and sweetgrass —  are burned to create a cleansing smoke bath. It is used to purify people, ceremonial and ritual space, and ceremonial objects.

“You don’t have to be Aboriginal to attend — it’s an opportunity to come out and see what it is about,” de Montezuma says. Other events provide opportunities for Aboriginal students to gather and discuss issues. “We’re always trying to incorporate Aboriginal culture into this space,” she says.

“Access Studies allows interested Aboriginal people to register in a specific set of university-level courses without registering in a degree program or undergoing the university’s standard admission process,” Mueller says.

The program has 18 students this year, providing an opportunity for them to acquire skills and experiences needed to apply for admission and successfully achieve a university education. The program includes courses on university writing and university math with an Aboriginal perspective.

Nick Therrien began in the Aboriginal Access Studies program after moving from Anchorage, Alaska. Today, he’s in his second year of the Bachelor of Science program, majoring in economics. The new Aboriginal Centre makes a big difference for students, he says.

“It’s the start of a new community,” Therien says. “It’s a common place where you can be at a post-secondary institution and yet come from all parts of B.C. and come together and have a good conversation. It’s a great place to have on our campus.”

Tanya Gregoire, who moved from Kitimat in Northern B.C. to Kelowna for her university studies, says the Aboriginal Centre’s support services and the collegium have built “a sense of belonging not only or me, but for all Aboriginal students at UBC Okanagan.”

“Aboriginal program services and the Aboriginal collegium have given me wonderful opportunities to build amazing relationships, have a place to go, and take pride in my culture,” she says.

“When you think about it, home is the place where learning starts,” says Armstrong. “When we have a place like this, it is like home — and this is where the real learning starts.” 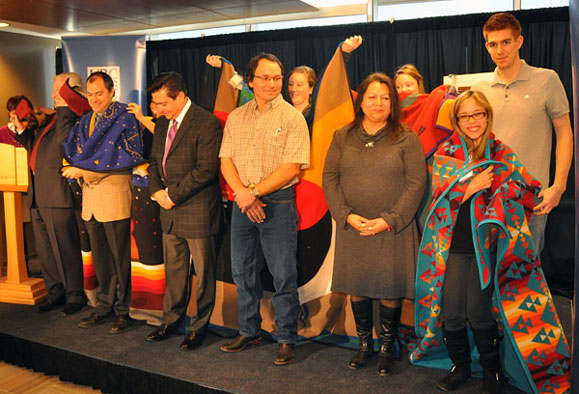