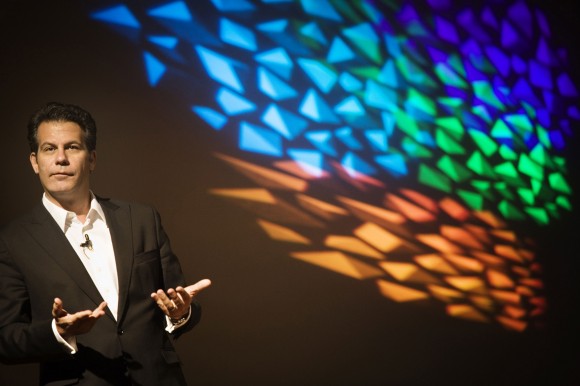 The presentation, which is the first in this season’s UBC Distinguished Speakers Series, was held as part of the 5th Anniversary Celebrations for UBC’s Okanagan campus.

Taking up the themes of his two most recent books, Who’s Your City? and The Great Reset, Florida explored how the creative economy is making where to live one of the most important decisions of a person’s life, and how new ways of living and working will drive post-crash prosperity.

“For the first time in economic history we have changed the way the economic game is played,” said Florida. “In the old days it was about land, labour and capital. Now, it is about our people. We are the key factor of human production.”

Florida added that metropolitan regions with high concentrations of what he calls the creative class — a diverse, tolerant, creative group of people that include, but are not limited to, high-tech workers, artists, musicians, entrepreneurs — have a higher level of economic development.

“I’ve found that diverse, talented people are drawn to places where they can easily plug in, regardless of race, ethnicity, gender, sexual orientation, or appearance,” said Florida.

Florida posits the theory that the creative class fosters an open, dynamic, personal and professional environment. This environment, in turn, attracts more creative people, as well as businesses and capital. He suggests that attracting and retaining high-quality talent, versus a singular focus on infrastructure projects such as sports stadiums, iconic buildings, and shopping centers, would be a better primary use of a city’s regeneration resources for long-term prosperity.

“The one common thing that people share is that we are all creative — from the farm and the factory to the service and music industry,” said Florida. “And that’s the challenge of our time. How do we create communities that harness the knowledge and creativity of all people?”

“And a fourth I’ve found is territorial assets,” says Florida, adding that Kelowna ranked well in these areas when compared to similar-sized cities in Canada. “Kelowna has all the ingredients which are important to making a great place. The key thing is to capture the creative energy of everyone.

“Creativity is everywhere around us. It is embedded in our communities. It lies within every single person who lives in the community or who wants to come here. Harness it.”

Esquire Magazine recently named Florida one of the ‘Best and Brightest’. He is author of the national and international best-selling book, The Rise of the Creative Class.  Florida’s ideas have been featured in major ad campaigns such as BMW, and are used globally to change the way regions, nations, and companies compete. He is founder of the Creative Class Group, an advisory services firm, charting new trends in business and community. Florida was recently named European Ambassador for Creativity and Innovation. He is Director of the Martin Prosperity Institute and Professor of Business and Creativity at the Rotman School of Management, University of Toronto.