Acclaimed novelist speaks in Kelowna on terrorism and Islamophobia 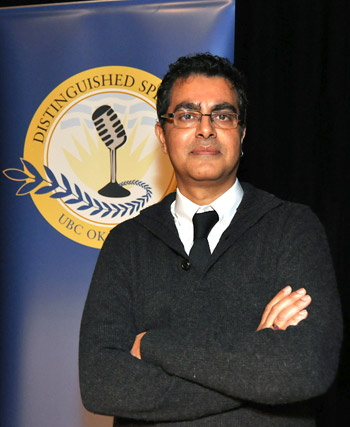 “How many people here have met a terrorist?”

That is the question Amitava Kumar, award-winning author and Vassar College professor of English, posed to a full house at Kelowna’s Rotary Centre for the Arts on Thursday night. The free public talk was presented by the UBC Distinguished Speakers Series.

Using humour and story-telling, Kumar weaved together passages from his most recent book, A Foreigner Carrying in the Crook of His Arm a Tiny Bomb, with his personal experiences of post-9/11 travel and one-on-one interviews with convicted terrorists to paint a poignant picture of the art and literature of terror, war and Islamophobia.

“Most of us have never met a terrorist, yet the terrorist is a symbol very intimate to us now,” said Kumar. “In a way, it is a figure who lives our lives with us because we do all these things that are calibrated by the terrorist amongst us. We behave in certain ways. But why is it we feel we know the terrorist?”

Citing the 9/11 Commission Report as an example, Kumar noted that drama and imagination have played, and continue to play, a significant role in creating the image of the modern-day terrorist.

“(Terrorism and Islamophobia) is rich with absurdity. It is rich with human drama,” said Kumar. “The 9/11 Commission Report was on the best seller list for non-fiction for several weeks. I wasn’t surprised — it’s a very clear prose, it’s very dramatic and easy to understand. But what was startling to me is that when you get a few chapters in, it says something like ‘we have to bureaucratize the use of imagination.’ The fact a government document should demand the use of imagination I think is startling.”

It is this imagination, continues Kumar, which can lead to stereotyping and projecting.

“There is something to be said about people not affixing — very quickly, prematurely, and in a naïve way– identities on people. One way in which hate is a failure of imagination is because it reduces the complexity of human lives into something utterly simple and crude.”

Kumar suggests that by placing people or ideas into pre-developed slots Western society is actually toying with the same principles that motivate terrorists to act.

“Terrorism springs — like totalitarianism — from a mode of thinking where everything has already been decided. That is what fundamentalism is: a rigidity of thought that cannot bend,” said Kumar.

The novel Home Products was published in early 2007 and was short-listed for India’s premier literary prize, the Crossword Book Award. It appeared in the U.S. under the title Nobody Does the Right Thing.