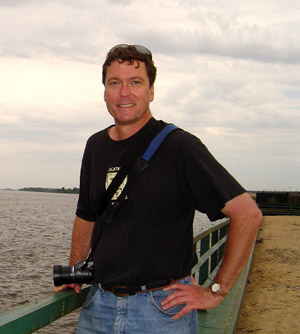 A book of essays edited by Adam Jones, associate professor of political science at UBC’s Okanagan campus, has received high praise from Choice magazine, which reviews books for thousands of academic libraries.

Evoking Genocide: Scholars and Activists Describe the Works That Shaped Their Lives was published in 2009 and earned a place on the influential magazine’s January 2011 list of Outstanding Academic Titles.

Jones’ book was recommended to libraries as “an excellent starting place for those interested in developing classes on the art and literature of genocide.”

“This compilation has a simple yet fascinating premise: ask leading human rights scholars and activists to reflect on the art and literature that most influenced them,” said the Choice review. “The result — 60 two- to three-page essays meditating on a wide variety of sources, from the essential (Elie Wiesel’s Night, 1960) to the unexpected (Star Trek) — is highly engaging and thoughtful.”

“Reading the book is akin to talking to a favourite professor about why he or she chose a specific field of study,” said the Choice review. “The essays, covering events ranging from genocide of the Indigenous peoples of the Americas to the genocide in Darfur, are not traditionally academic, a fact that may make this book more accessible to students.”

Jones has authored or edited more than a dozen books, including the acclaimed textbook Genocide: a Comprehensive Introduction, widely used in introductory university courses in this emerging field of study.

One of 50 Key Thinkers

On the strength of his contributions to both Holocaust studies and genocide studies, Jones was recently selected as one of the world’s “Fifty Key Thinkers on the Holocaust and Genocide,” for the book project of that title edited  by Paul R. Bartrop and Steven L. Jacobs. The book studies each scholar’s background and influences, and examines each thinker’s contributions to the field.

Jones, the third-youngest scholar included in the book, says the recognition is particularly meaningful because of the people among whom he has been included.

“To be alongside illustrious names like Raphael Lemkin, who invented the term ‘genocide’, Mark Levene, Leo Kuper — the giants of the field — is personally very gratifying,” says Jones.

The listing combines two distinct fields  — Holocaust studies and comparative genocide studies — and surveys the entire history of each of these relatively new fields of scholarship.