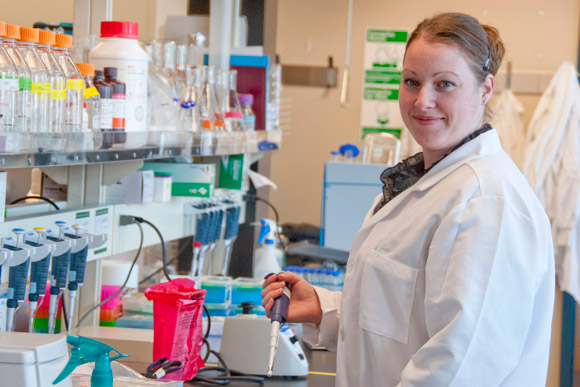 The microbes living in your gastrointestinal tract may be very tiny, but they have a big impact on health.

Until now, it has been widely believed that genetics were the major factor that determined how well your body could resist intestinal infections. That assumption is now changing, thanks to a new study led by Deanna Gibson, asst. prof. of biology at UBC’s Okanagan campus, published in the April edition of the American Journal of Physiology ­– Gastrointestinal and Liver Physiology (ajpgi.physiology.org).

Studying mice for their susceptibility to the colitis-causing bacteria Citrobacter rodentium, Gibson and her research team have found that colonic microbiota – the community of bacteria that live in the gastrointestinal tract – play a critical role in protecting against intestinal infection. They do that, in part, by inducing responses in the body that help fend off the pathogens that cause the symptoms of disease.

“Both humans and mice show variable susceptibility to enteric infections,” says Gibson. “For example, your family might all eat the same buffet lunch but only one person gets severely sick, while others suffer mild symptoms or nothing at all.

It was thought that these differences in susceptibility were due to a different genetic makeup. Gibson wondered if the microbiota in the gut could play a role in disease susceptibility.

After microbiotic material in fecal matter from the colitis-resistant mice was fed to C3H/HeOuJ colitis-susceptible mice, the survival rate was completely reversed: 100 per cent of the C3H/HeOuJ mice survived. This seems to be associated with protective bacteria from the phylum Bacteroidetes, which are a normal part of our intestinal commensals (the bacteria that live within our bodies normally).

“This study reveals the microbiota is sufficient to overcome inherent genetic susceptibility patterns in C3H/HeOuJ mice that cause mortality during C. rodentium infection,” says Gibson.

“The idea for this study came from my next door neighbor,” says Gibson. “He had suffered severely from ulcerative colitis for many years and was in complete remission when I met him. I asked him about his remission and he indicated that he had gone to Australia where a team of doctors treated him using fecal bacteriotherapy.”

In simple language, Gibson says, he was given an enema of fecal matter taken from a healthy donor.

“I was really excited by this and thought I could do this experiment in mice to determine how the microbes affect disease susceptibility,” says Gibson. “Using mice to study mechanisms of protection from commensal microbes will help us develop future therapeutics that would be more acceptable than feeding individuals fecal matter.”

Much of this research was done by Gibson’s students Kirsty Brown, Jessica Baker, Samantha Makarenko and Ethendhar Rajendiran, with significant contributions from Bruce Vallance, assoc. prof. with the Department of Pediatrics at UBC’s Vancouver campus, and Sanjoy Ghosh, asst. prof. of biology at UBC’s Okanagan campus, and his student Swagata Halder. The research was financially supported by Robert Hill and the Intestinal Disease Education and Awareness Society (IDEAS), as well as institutional funds.

One of the major areas of focus in her lab is how specific dietary factors alter the abundances of certain microbes in the gut.

“This area of research could possibly educate us on how to make important dietary changes that could potentially put the power and responsibility of our health in our own hands.” 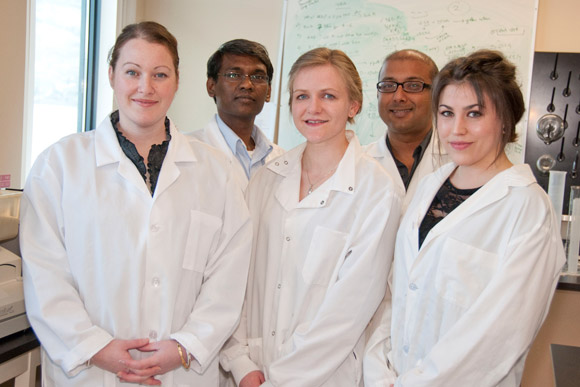 One response to “UBC study: Microbiota fend off intestinal infections”