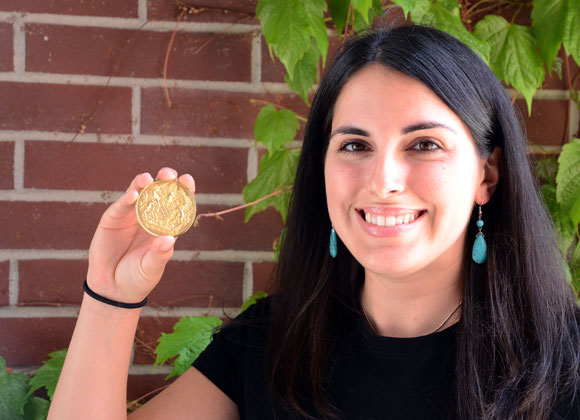 Three Convocation ceremonies are being held at the University of British Columbia’s Okanagan campus today, wrapping up an historic two days of conferring degrees and awards.  A record 1,174 students donned caps and gowns to receive degrees, up from 940 conferred last year.

Among highlights of Friday’s activities is the awarding of the Governor General’s Gold Academic Medal to Ruth Emily Brown, who has the highest College of Graduate Studies academic achievement with a 92 per cent average. Other notable milestones include the awarding of the first PhD degree completed completely at the Okanagan campus to microbiologist Max Jones and the first graduating class in Human Kinetics.

In addition, two awards were presented for Teaching Excellence and Innovation to instructors Joyce Boon and Christopher Schneider.

Not only did Ruth Brown complete the Human Kinetics program for her master’s degree ahead of schedule, she did it with an astounding 92 per cent average.

Brown finished the program in February and is the 2011 recipient of the prestigious Governor General‘s Gold Academic Medal. The medal is awarded each year to the student at UBC’s Okanagan campus who achieves the highest academic standing at the graduate level. Since it was first awarded in 1873, this medal has become one of the most prestigious awards a student in a Canadian educational institution can receive.

Brown admits she was overwhelmed when she learned of the honour. She credits her professor, Jennifer Jakobi, with playing a significant role in her achievement.

After earning her undergraduate degree with Jakobi at the University of Windsor in 2009, Brown, who hails from Tecumseh, Ontario, followed her mentor to UBC, where Jakobi took a position as an assistant professor. Brown has known Jakobi for six years, and the line between student and teacher has long been erased.

“She’s my professor and thesis advisor, but I also consider her my friend,” said Brown who is currently living in Ontario. Her education is not finished, however, as she is starting her PhD at York University this fall, meaning another four years in the lab and classroom where she will study health and fitness behaviour.

To help achieve her goal, Brown received a post-graduate scholarship for doctoral studies.

“That’s going to fund my PhD, so that means I won’t be a starving student,” she said. Brown admits to not being “100-per-cent sure” about her future beyond York, but she is thinking of becoming a professor herself.

“I always wanted to be a teacher,” said Brown, who at one point considered becoming a high school teacher, but is now looking at the post-secondary level. In fact, should the opportunity arise, there is a chance Brown could once again grace the Okanagan campus – this time as faculty.

The hard part, she admits, would be convincing her fiancé, whom she is marrying this year, to leave Toronto and come to the Okanagan campus she was so smitten with during her 18 months here.

“I met a lot of great people and made a lot of great friends,” she said, adding friends she made here are in her wedding party. “I would totally love to come back.”

Brown’s professor has high praise for her star pupil.

“We’re very proud of her,” said Human Kinetics Assistant Professor Jennifer Jakobi. “Ruth is an exceptional person and a very competent individual who will succeed in whatever she ultimately chooses do to.”

The University of British Columbia’s Okanagan campus has truly gone international. This year, close to 500 international students are receiving their education in the Okanagan, with more than 50 of them graduating in 2011.

“They are from 75 countries,” said Flannigan. “They are really fascinating.”

Karen Robles hails from Mexico and the honour student will graduate from the Bachelor of Applied Science in Mechanical Engineering Class 1 this year. Robles is also the first recipient of the International Leaders of Tomorrow Scholarship and plans to stay on campus to complete her graduate studies here.

When Suud Nahdi arrived in the Okanagan in 2008 from his native Tanzania, he admits to being a little intimidated.

The Bachelor of Science graduate, with a major in bio chemistry, received the Student Leader of the Year award and recently returned from a month-long trip to Peru.

He is also the recipient of the President’s Entrance Scholarship and Outstanding International Student Award. Nahdi’s long-term goal is to become a doctor.

Karolina Tatarenkova travelled across the Atlantic to attend UBC. Born in Russia, Tatarenkova is completing her Bachelor of Management degree.  The honour student plans to remain in Canada and make a name for herself in the Canadian business world.

Nahdi talks about being on his own for the first time, being in a new country and life on campus at: www.connectionsforlife.ubc.ca/suud.html

For more information on international students on campus, go to: www.ubc.ca/okanagan/students/international