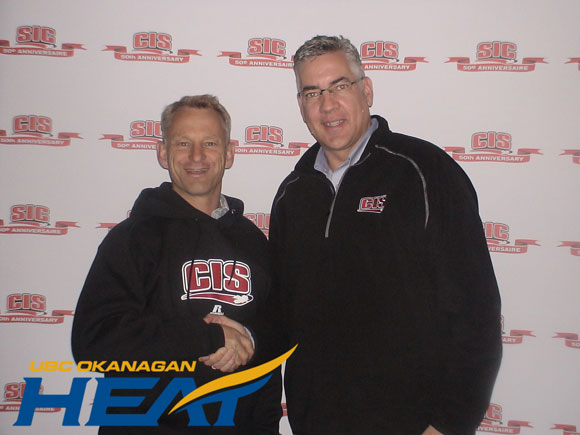 The University of British Columbia’s Okanagan campus will now compete at the highest level of interuniversity sport in Canada. An application for membership in Canadian Interuniversity Sport (CIS) for the men’s and women’s basketball and volleyball teams earned unanimous approval at the recent CIS annual general meeting in Victoria.

The Heat teams were accepted into the Canada West Universities Athletics Association in May, pending this approval by the national body.

“We began this journey in June of 2006 so it is wonderful to finally have that first phase complete,” says Rob Johnson, director of athletics for UBC’s Okanagan campus. “While the process was challenging at times, the strong support shown the department from our student population, the faculty and staff, the senior administration, and the community at large, was unwavering and greatly appreciated.”

Owram says moving to this top tier of competition is yet another reason to cheer Heat teams on and he counts himself among fans.

“Our Heat teams have enjoyed extraordinary success at the collegiate level in provincial and national competition, and we look forward to their future achievements,” says Owram.

“It will be very exciting for our community to see the Heat play teams from all of Western Canada’s major universities, including the Thunderbirds from UBC’s Vancouver campus,” says Owram. “We wish our student-athletes, their coaches and our entire Athletics Department the very best as they prepare for an historic first season as members of the Canada West division.”

The Heat will host the Thunderbirds in volleyball on the weekend of November 4th and 5th, while the basketball teams play the Thunderbirds for the first time at the War Memorial Gymnasium in Vancouver Jan. 27th and 28th, 2012.

“The best part about this news is that starting this fall, our basketball and volleyball student athletes can compete against their peers from other universities in western Canada and our fans have the chance to cheer for the Heat in the highest level of amateur sport in Canada,” says Johnson. “I am hopeful that within the next few years we will be in a position to move the rest of our sports into the CIS.”

Once the complete schedule is finalized the information will be posted at www.goheat.ca