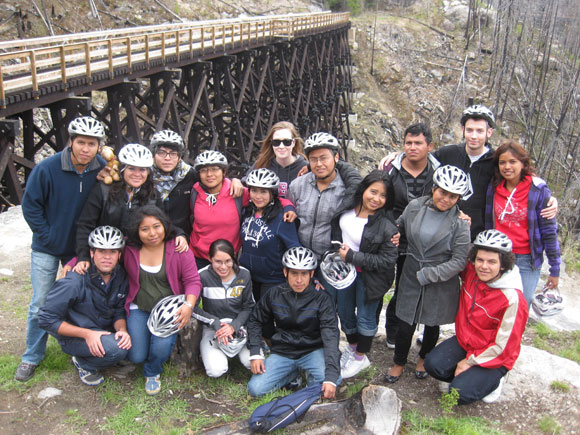 UBC students Joanne Gabias, centre with sunglasses, and Aaron Wylie pose with Quintana Roo students at the Kettle Valley Rail beds during their visit to the Okanagan. Gabias is looking forward to her time in Mexico in July and plans to immerse herself in the everyday life of the host country.

Learning Spanish only part of the adventure

When Joanne Gabias lands in Mexico in July, she has little desire to hit the tourist hot spots.

In fact, the linguistic anthropology major at the University of British Columbia’s Okanagan campus turned down a chance to visit Cancun beaches in favour of spending time intermingling in the everyday lives of her hosts. There will be some visits to tourist destinations but for Gabias, the real adventure will be mixing with the locals.

Gabias is among several local UBC students traveling to the Quintana Roo University July 2 to 24 where she will learn Spanish and help teach English, but she is most interested in what she will learn living among average Mexicans for almost three weeks.

“There are going to be lots of cultural experiences,” she said. “We’re going to go and visit Mayan villages. We’re going to act like locals and do what locals do.”

Her hosts have already spent time in Canada, where they toured B.C. and immersed themselves in Canadian culture. From their visit here, Gabias learned some lesser-known facts about Mexican culture – like putting ketchup and mayonnaise on popcorn.

“Even at the movie theatres in Mexico, they have ketchup for you. That’s the sort of thing you don’t learn without spending time with the locals,” said Gabias.

As for the Mexican students, their trip north will not soon be forgotten.

“Before the trip, their knowledge of Canada was limited. This has been a great learning experience for them,” said Quintana Roo University instructor Caridad Macola.

The highlight for many students was the trip to Big White – where they were introduced to snow – and cycling on the Kettle Valley Rail beds.

“It was amazing for me to see the snow (for) the first time,” said Rosy Cuevas. “I love playing with it and (trying) the snowboard, although it was just a little trip.”