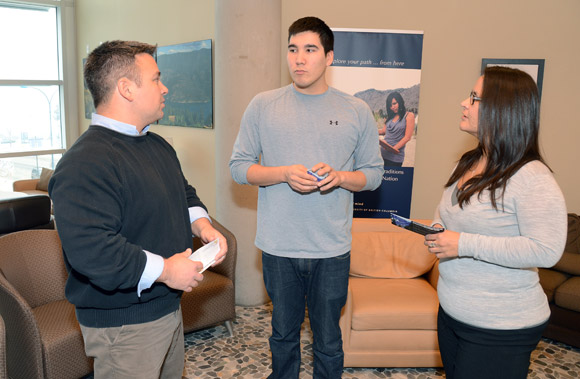 Representatives spend day learning about Aboriginal Access Studies, call it a model for their campus

They came. They saw. They were impressed.

A Nova Scotia delegation from Dalhousie University toured the Aboriginal Centre at the University of British Columbia’s Okanagan campus on Wednesday and they were impressed with what the university has done and the programs it has in place for Aboriginal students.

Arthur Stevens, Bridging Program co-ordinator at Dalhousie and Kara Paul, Manager Aboriginal Health Sciences Initiative at Dalhousie, spent the day touring the facility, learning of its programs and asking a lot of questions.

Stevens said he did extensive research on universities with Aboriginal programs, and the Okanagan campus stood out as one of the best in the country.

“I really liked the indigenous content they were developing,” says Stevens, adding using such traditional items such as the medicine wheel in the Okanagan programs got his attention and prompted the pair to cross the country for a closer look.

“We got a lot of clear steps in what to do and how to make it sustainable,” says Paul, who admits she was a little reluctant to take time out of her busy schedule to come to the Okanagan.

“I’m very glad I came, it was well worth the trip,” she adds.

Dalhousie does have Aboriginal programs in place, but they are focused more toward getting Aboriginal students into the field of medicine. After seeing everything the Okanagan campus offers, Stevens said the centre has “raised the bar” for what a university can offer to First Nations students.

“(At Dalhousie) it is a pure prep program,” says Paul. “This is a more integrated model that has prep and university courses. This is the type of program I envision for my university.”

Adrienne Vedan, Aboriginal Programs and Services manager, says the centre has worked closely with faculty to offer math and English courses from an Aboriginal perspective.

“There are not too many courses like that at other universities,” says Vedan. Along with the courses, the actual centre itself is unique as it acts as a gathering space for students and is something not many other universities have. Paul said a similar centre is one of the goals of Dalhousie.

“This is an excellent model,” says Paul. “There is a lot of my vision that has played out here. They showed us how to do it.”

Stevens said the goal now is to put a plan together that would work at Dalhousie.

“These people have set the bar high,” says Stevens. “It shows the university has paid attention to the issues.”

For more information on the Aboriginal Centre, go to www.ubc.ca/okanagan/students/aboriginal.