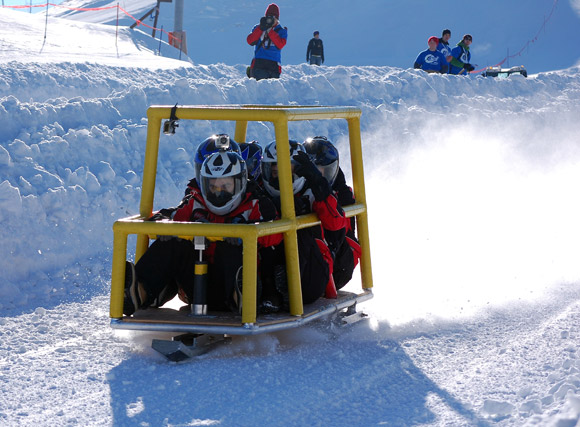 Those results are even more impressive considering it is the first time UBC’s Okanagan campus has entered a team of engineering students in the Great Northern Concrete Toboggan Race in Calgary.

The university sent 16 budding engineers from various disciplines to the annual event where they raced a toboggan built from scratch. The toboggan required concrete running surfaces, a maximum weight of 300 pounds, a braking and steering system and the capacity to carry five people.

UBC tobogganer Brian Shewchuk says the team completed all three runs – which, like racing at Indy, is in itself quite a feat.

“Most teams only did two runs. Some didn’t even make it down the hill,” says Shewchuk, who was in charge of design and fabrication.

Teammate Chris Dutil says many of the universities have been at the competition before, but the Okanagan campus engineers’ lack of experience was not a factor.

“Our top speed was 42 kilometres an hour, which was above average,” says Dutil.

The University of Alberta team was one of the first to make a run down the track, but Dutil says the course proved too long, with the toboggan gaining too much speed at the bottom, causing the U of A crew to crash hard. The track was shortened for the remainder of the competition.

Neither Dutil nor Shewchuk will be back next year as they are on track to graduate from the civil engineering program this June. But they will begin recruiting next year’s team before departing UBC.

“Since this was the first year, there was a steep learning curve,” says Shewchuk, adding this year’s group  is putting together a substantial file of information for next year’s team, in hopes of improving their standings.

The competition is judged by industry and academic professionals and is based on design and presentation of the concrete and reinforcement, superstructure, braking and steering as well as race-day performance.

The Okanagan team was partially funded by the School of Engineering and the Professional Activity Fund. The community also got behind the team with many local sponsors helping out.

“We wouldn’t have been able to do it without that support,” says Dutil. 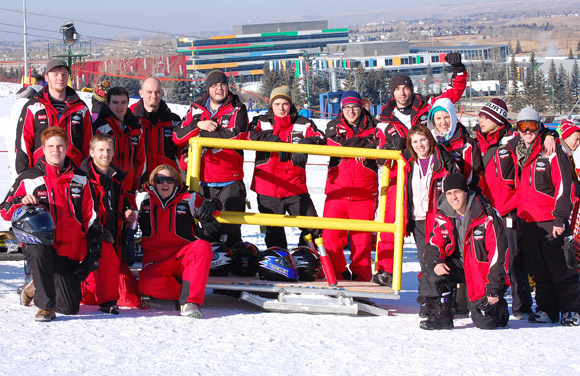 UBC’s Okanagan campus concrete toboggan team poses for a picture during the annual Great Northern Concrete Toboggan Race in Calgary over the weekend.