Awards make reality of living a dream at UBC 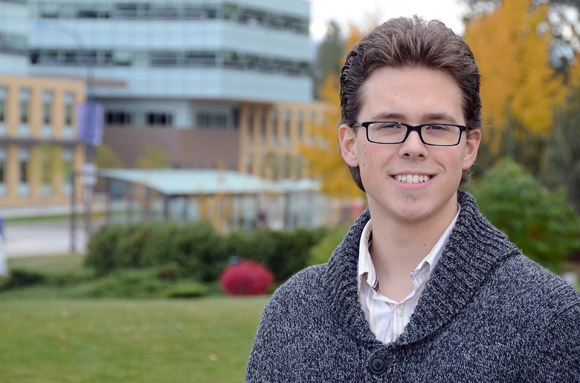 For James Beaton it was a chance to change his life, to pursue a dream, to achieve something he once thought impossible.

The Bachelor of Arts student at the University of British Columbia’s Okanagan campus received the James R. Conway Scholarship and Bursary Endowment two years ago, allowing him to leave his home town of Coaldale, Alta. and pursue higher education – a dream that at one point, he thought would never happen.

“I felt that I just wasn’t supposed to go to university – the costs and the risks were so high, but receiving the scholarship encouraged me to push the boundaries that I had always imagined were there,” says Beaton.

“This scholarship gave me significant reassurance that I was not completely without a means of attainting my dream.”

Thanks to Conway’s support, Beaton is achieving his academic goals and one day hopes to pursue a law degree and a career with the United Nations in international law.

“Choosing to pursue a job in this area will allow me to add my voice to those already calling out for justice,” he says.

With less financial stress, Beaton made the Dean’s List in his first year and won the Deputy Vice Chancellor Scholarship, which is assisting him financially in his second year. As a new UBC Residence Advisor, Beaton is helping other new students find confidence and their place on campus.

At the start of classes in 2011, more than $1.5-million in awards helped students attend the university – more than double the total when UBC’s Okanagan campus was established in 2005.

Wesley Pue, provost and vice-principal, says scholarships play an important role, not only for the student, but the university as well.

“Scholarships allow students some financial freedom to attend a post-secondary institution,” says Pue. “Scholarships are also a strong recruiting tool that allows the university to bring some of the brightest minds to the Okanagan. Every year we see more and more people wanting to attend UBC’s Okanagan campus and these scholarships make that a reality for many students.”

A wide variety of scholarships are available to secondary school students, aboriginal students, students with disabilities, foreign students as well as current students.

“UBC’s Okanagan campus strives to provide an unmatched post-secondary education, and to attract the best students from all segments of society.  That commitment is reflected in the number and variety of scholarships presented each year,” says Pue.

But scholarships go beyond monetary gain, says Spiro Yannacopoulos, associate dean and director of the School of Engineering, which has numerous scholarship holders.

“In many cases, the more important reason is the prestige it gives to the student,” says Yannacopoulos. “A scholarship is a recognition of the achievement for the student. When they apply for graduate school or a job, this is quite important.”

Yannacopoulos says scholarships are also an endorsement of the university and its programs.

Adrienne Nolan, director of development of UBC’s Okanagan campus, says donors help the university with its stated objective of keeping finances from being a barrier to attend the institution.

“They make sure finances are not an obstacle for gifted students,” says Nolan. “New awards are an excellent way for donors to UBC to help students. They know they have created something positive for a student with great potential.”

Donors can specify a faculty for their award, and many chose to do so.

“They see themselves in the kind of student receiving their award,” says Nolan.

As the Okanagan campus is only six years old and growing, Nolan says more donor support is required to keep pace with the increasing student need.

Scholarships are awarded primarily for academic achievement but some may require achievement in other areas such as leadership, community service, artistic endeavours, and athletics. Typically, they are offered based on achievements in the preceding school year and awarded at the beginning of the Winter Session.

Awards may refer to many types of academic funding. Awards have an academic requirement but also emphasize community involvement or other non-academic qualifications. They may be awarded at the beginning or end of the year, depending on the intent.

Prizes are awarded based on academic achievement at the end of a session and recipients are not required to return to UBC in order to receive them. They may be awarded on the basis of performance in a specific course, best marks in a program, or for other specified reasons. Some prizes consist of monetary awards while others may be books or medals.