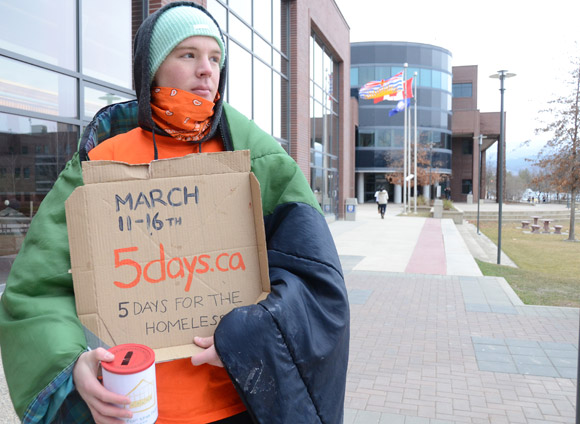 Student Austin Newton will be ‘homeless’ until 5 p.m. Friday as part of a campaign to raise funds and awareness for the homeless. Austin and four other students will be sleeping on the concrete in front of the Irving K. Barber School of Arts and Sciences this week.

Fundraiser 5days.ca has students sleeping outside to raise money, awareness

A group of UBC’s Okanagan campus students have given up their warm beds for hard concrete and cold winter winds in a bid to raise money and awareness of the plight of homeless people.

The students spent their first night sleeping in front of the Irving K. Barber School of Arts and Sciences Sunday and will remain ‘homeless’ until Friday at 5 p.m. They still attend classes through the day, but must be outside from 7 p.m. to 7 a.m.

Erica Sutherland says Sunday night was “a little cold, but it was for a good cause so it was worth it.”

This is the fourth-year psychology student’s last year on campus and she wants to “make a difference” before leaving. So she signed up to get a glimpse of what life is like without a place to call home – with only cardboard and a sleeping bag for a bed.

“This experience has opened my eyes to the conditions and elements they (homeless) have to go through every day,” she says.

The five students gladly accept food donations. They also spend time ‘pan handling’ to raise money for the cause.

The campaign is part of a nation-wide awareness and fundraising effort. Last year, Burgart slept outside for five days as did co-organizer Kendra Hapke. But since there is only room for a few students both stepped into the organizing role this year so others could do their part.

“This is the third year UBC’s Okanagan campus has participated in the campaign and you can see people are paying attention to us,” says Burgart. “There are still people ignoring us, but a lot more are saying ‘Hello’ and donating some change.”

Burgart says many people do not know how to address the homeless, so the campaign is also about making people aware of their plight and the need to reach out and not be afraid.

For more information on the project or to donate to H.O.P.E. Outreach, go to www.5days.ca/kelowna, www.hope-outreach.com.