Athletic Scholarship Breakfast helps on and off the courts

Men’s Heat volleyball player Greg Niemantsverdriet says scholarships played a vital role in being able to play sports and get an education.

Sports have always been a big part of Greg Niemantsverdriet’s life, and thanks to scholarships, the UBC Okanagan Heat volleyball player can pursue an education while continuing to compete.

“There are not a lot of errors in this league,” he says. “Every game is really important. Everybody is good including their benches.”

“To have the chance to play and get an education is a privilege not a lot of students have,” he says.

“We knew it would be challenging and we believed we could compete. Our student athletes and coaches really stepped up,” says Johnson. “We didn’t win as many games as we would have liked, but we won more than anyone outside UBC’s Okanagan campus predicted. What is more important to me than winning, our student athletes competed as hard as they could, the whole game, every game. You can’t ask for any more than that.”

Johnson says the Okanagan campus is starting to establish a reputation with recruits. 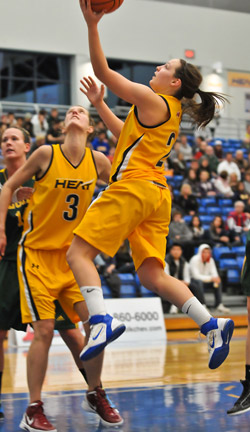 Women’s Heat basketball player Emily Kanester says scholarships played a vital role in being able to play sports and get an education.

“I am sure a lot of people were watching closely to see if we really were an option for them as they make their post-secondary decisions,” he says. “Based on the number and quality of recruits we have signed so far, it seems they liked what they saw and want to help us develop our programs. This wouldn’t be possible without the support we get from the community in terms of spectators and financial support of our scholarships.”

Like Niemantsverdriet, scholarships played a significant role for basketball player Emily Kanester, from Vernon, who doubts she would have been able to play, go to class and work all at the same time.

“I wanted to play a sport in university since I was in high school. The scholarships were really important. It paid for my tuition. It was such a big help,” she says. “I don’t think there is any way I could do school and basketball without the scholarships.”

Tickets for the seventh-annual Valley First/UBC Okanagan Athletics Scholarship Breakfast are now on sale.  The event will be held at the Capri Hotel March 29 and features renowned sport psychologist David Cox. For more than 25 years, Cox has worked with athletes from grassroots to international levels. In particular, he has worked extensively with Tennis Canada, the Canadian Davis Cup Team, Skate Canada, Rugby Canada and a host of other Canadian national teams. He has attended the Olympics on numerous occasions, most recently in support of the Canadian Snow Board Team at the 2010 Games.