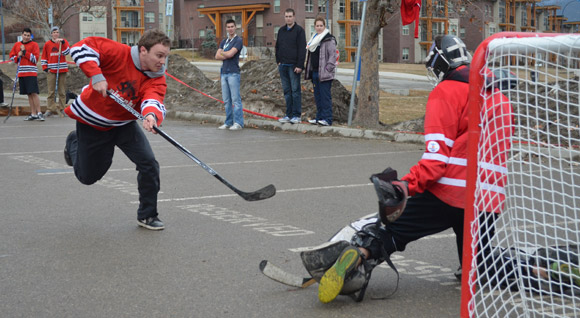 A total of nine teams, made up of male and female players, participated in the Campus Life event. Student organizer Michelle Noiles was impressed by the sportsmanship displayed during the six-hour long competition.

“The tournament ran very smoothly. It was a great opportunity to bring such a diverse number of students together. We would like to make this event the largest fundraiser for the Food Exchange each year. It’s a great opportunity to use friendly competition to raise school pride and create a sense of cohesiveness between students,” said Noiles.

Following the round robin, four teams were tied with 3-1 records. To determine first place overall, Nicola One and Purcell Two advanced into the A-final by scoring the most round robin goals.

The final featured plenty of drama as the two squads ran to a 5-5 draw in regulation. In the winner-take-all shootout, Brett Saremba notched the tourney-winning marker for Nicola One.

“I was coming in on the goalie and he tried a Dominik Hasek thing with his stick and I just put it top shelf,” said Saremba after being congratulated by his teammates.

Team members of Nicola One all received ‘UBC 2012 Ball Hockey Champion’ t-shirts, courtesy of Aboriginal Programs & Services. In the race for third place, Cassiar defeated Kalamalka 3-2 in a shootout.

For student Alex Augier from Saskatchewan, the ball hockey tournament was a flashback to his youth and he appreciated the user-friendly format.  “I had a great time at the UBCO Ball Hockey (tournament). I hope it’s on again next year because it helps build community for us students,” said Augier, a Woodland Cree Nation member.

Sherissa Kanten from Calgary also appreciated the competition. “This is my first year at university and I thought it was good. When you play everybody (in round robin), it gets competitive, but it was fun.”