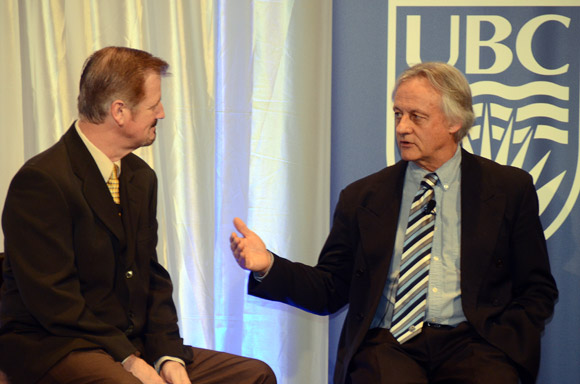 Student athletes are not only scholars and competitors – but their participation as volunteers results in community betterment and benefits for many organizations throughout the Okanagan.

The sunrise event raises funds that go directly in the Athletics Scholarship Endowment, ensuring that student athletes at UBC’s Okanagan campus have the opportunity to realize both their academic and athletics goals at a top-ranked Canadian university.

UBC President Stephen Toope says events like the Athletics Scholarship Breakfast are vital to the success of Heat teams and the Okanagan campus.

“One of the important objectives is to improve our athletics facilities,” Toope told the crowd. When UBC’s Okanagan campus opened in 2005, there were 3,000 students. Now with an enrolment of nearly 8,000, the challenge is to improve and expand those facilities, says Toope.

Gifts like the $3.5 million that Kelowna residents Mary Jo Schnepf and Barry Lapointe donated for The Hangar Fitness and Wellness Centre will help achieve that objective.

“All in all, thanks to our alumni and our donors, we are off to a flying start,” says Toope.

Doug Owram, deputy vice chancellor and principal of the Okanagan campus, says UBC is immensely proud of the accomplishments of its student athletes.

“A vibrant athletics program is important to the university in so many ways,” says Owram. At UBC, student athletes exemplify service to the community through numerous volunteer efforts.

“Our athletics program is connected to our community in many ways, and it also helps build our reputation in other communities across the country. This year, much more than ever before, we have enjoyed higher visibility thanks to our participation in Canada West competition.”

Owram lauded Okanagan Heat team members for their contribution in such activities as the Wendy’s Dreamlift Day, the Kelowna Food Bank’s “Stuff the Bus” campaign, the Terry Fox Run and the Super Walk for Parkinson’s.

Student athletes also show leadership in staging a number of youth sports clinics, and their own Read to Achieve program with visits to elementary schools.

“Scholarships can be the difference in attracting outstanding students with options anywhere in the country,” says Owram. “The endowment supported by this morning’s community event makes those scholarships possible.”

Owram also thanked the community for its support. “One of our key missions as a public university is to connect with our community – sport is one way that this can occur. This scholarship breakfast is a great example of the community supporting the university.” 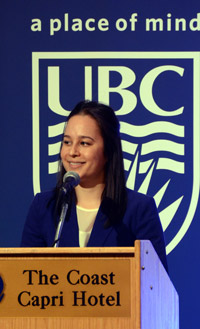 Rob Johnson, director of athletics and recreation for UBC’s Okanagan campus says students who excel in both academics and athletics are high achievers interested in doing their best at many endeavours. “I am very proud of our student athletes and their efforts in the classrooms, on the court and in the community,” says Johnson.

Community support is important to the success of students who take up varsity athletics, says Johnson. “We want to thank Valley First Credit Union for its continued support as our title sponsor,” says Johnson. “We can’t thank the community enough for it support of our student athletes. It is very encouraging to see this support at an event like this and it means so much.”

Launched in September, the ambitious Okanagan campus campaign aims to raise $100 million and double the number of UBC alumni engaged with the university. Thursday morning’s Valley First UBC Okanagan Athletics Scholarship Breakfast raised more than $50,000 in community and matching support. Now in its seventh year, the morning fundraiser supports an endowment to create scholarships for student athletes. Over the years, the Scholarship Athletics Breakfast has raised more than $350,000 for student athletes.