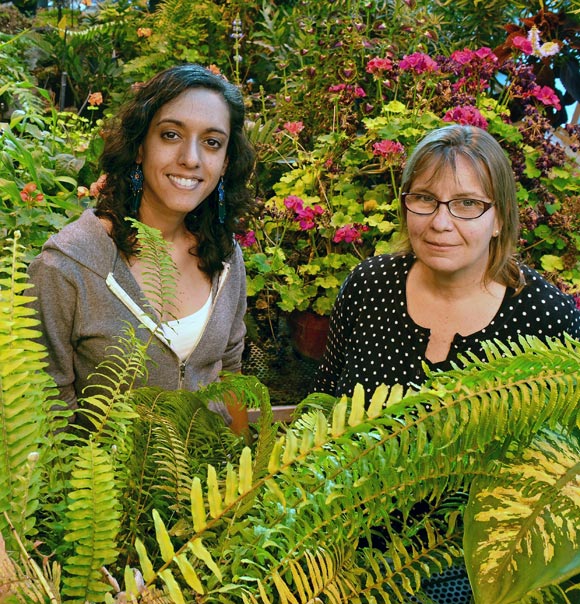 Once considered an obscure corner of botanic science defended by a small clutch of world experts, the study of plant intelligence is reaping some serious attention.

The academic group promotes the study of plant intelligence – a topic that can leave people scratching their heads. Admittedly, the notion can be confusing and has created deep rifts among scientists themselves, says Murch.

Plant intelligence is not measured on a human scale – they have no brains or neurosystems – but some biologists and horticulturalists argue passionately that plants are more like animals than we think. They adapt to their environment, distinguish daylight hours as seasons change, use their root systems to signal other plants, share food, colonize other species – and viciously repel enemies.

“It opens ideas about all kinds of things. Do plants choose to behave or misbehave?” asks Murch, associate professor in the Irving K. Barber School of Arts and Sciences at the Okanagan campus. “Do they go extinct when threatened, or do they choose to become invasive and attack?”

Murch’s research has uncovered traits in plants related to how they perceive light, keep time in adapting to changing sunlight and in knowing when to flower. She has fed them a variety of drugs that, as with humans, alter their behaviour and growth.

Last summer, Murch and UBC hosted the global society’s annual conference in Vancouver where more than 40 countries were represented. Respected academics from the Universities of Florence and Bonn and institutions in Japan and Australia zealously espoused their theories, promoting peer-reviewed findings on plant behaviour.

Unlike past conferences, Vancouver drew serious – and unexpected – scrutiny. Michael Pollan, the foremost U.S. author on food and agriculture – frequently consulted on government agricultural policy – was there writing an in-depth piece on the conference and “the emerging science of plant intelligence.” His story is expected to appear in a December issue of The New Yorker. Also taking notes was Canadian science writer Elaine Dewar, whose book, Smarts, will be released next year.

Besides winning esteem for plant intelligence as a legitimate branch of scientific inquiry, the conference also dared plant experts to re-examine the language of science.

Murch invited UBC literary scholar and sessional lecturer Sonnet L’Abbé to present a perspective distinct from the horticultural discussions. The two collaborated earlier on an interdisciplinary class project about plant intelligence where creative writing and science students learned side by side.

L’Abbé is authoring a new book about plants. She uses metaphors, language and archival writings as the nexus of hard science and emergent movements in eco-art and eco-poetics, thus building bridges between artistic and scientific communities.

L’Abbé challenged the scientists to examine their perceptions. She cited examples such as the 18th and 19th century English Romantic poetry of William Wordsworth. Historic writing shows plants as beings that exhibit sentient characteristics, concepts advanced by leading scientists and literary figures alike.

“Wordsworth’s writing occurs at a moment in history when fields of natural philosophy were not yet fully differentiated into zoology, botany, human anatomy and science of the mind,” says L’Abbé, who teaches creative writing and poetry in the Department of Creative Studies.

When today’s scholars interpret writing that suggests a connection of cognition and vegetative life as just a poetic construct incompatible with rigorous inquiry, they ignore the rich cultural context from which the writing emerged, she told the conference.

L’Abbe’s research brought a fresh dimension to the discussion, as plant experts talked about using language to fuel imagination, generate new ideas and describe their work more precisely. That, in turn, helps biologists shed biases and jargon that often makes their research inaccessible beyond the science academy.

Murch considers it an important step. “I want people to think how using words affects their scientific research and experiments. Creating that cross discipline for perspectives is valuable,” she says.

One response to “Science of plant intelligence draws serious scrutiny”