Getting to and from campus is a pressing issue and one of the most asked-about topics for our students, faculty and staff. This update outlines the current status of several access issues: 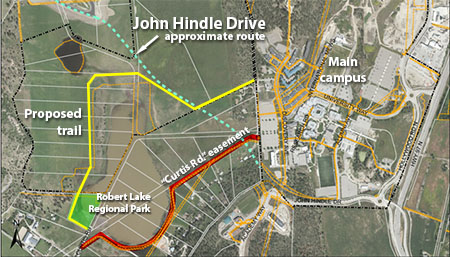 The west side of campus is connected to Curtis Road in the Glenmore valley via a private easement road (shown in red on the map above).

UBC is hopeful that these restrictions will be lifted and anticipates further direction from the court in the near future. We will widely communicate any new information as it is available.

The City of Kelowna has indicated that John Hindle Drive, which will connect Glenmore Road with Highway 97 via a route through UBC’s West Campus lands, is slated for completion in 2017. Active planning is underway with the University participating in the city’s planning processes. The University is also expending considerable effort with all levels of government to expedite construction of the road.

While not an immediate solution, John Hindle Drive will eventually provide additional much-needed safe access to the university from the west.

For many cyclists and pedestrians, restrictions on the use of the Curtis Road easement leaves Highway 97 as the only legal route to the northern neighbourhoods of Kelowna, including UBC Okanagan. The very busy section of Highway 97 over the narrow Ellison Overpass is a challenging and hazardous cycling route.

UBC received a formal petition in October calling for a new trail to be created through the University’s West Campus farmland. The proposal, which suggests a route around the west side of Robert Lake then east to connect with the main campus property near the Mountain Weather Office, has merit and we have started exploring its feasibility, including potential routing, cost and required approvals for such a trail.

In addition, the proposed trail would require right-of-way consent from the Glenmore Ellison Improvement District (GEID), which owns a narrow linear parcel of land that separates our main campus and the West Campus land.

The University has also learned that construction of the path would have to avoid the prime construction months of April through July. This is a result of habitat disturbance restrictions in the Migratory Birds Convention Act.

Finally, funding for the project is also a challenge as a recently completed design study provided a cost estimate of $500,000 to $700,000. While a multi-use trail is an access priority, and the University is prepared to make a reasonable contribution, UBC believes it is not the sole responsibility of a university to independently fund public transportation.

The City of Kelowna and Ministry of Transportation and Infrastructure have planned for a $3.1-million multi-use pathway over the CN Railway, allowing cyclists and pedestrians to avoid the narrow Ellison Overpass. Preliminary design and engineering work is complete, and UBC has contributed funds toward the design.

Construction was to have started in 2013; however, construction cannot begin until CN Railway has responded to a right-of-way application. The recent failure of the short-line rail operator has delayed CN’s approval process.

Currently, CN Railway is considering the future of the rail line between Kelowna and Vernon and there is a possibility that the rail line will be decommissioned. If that happens, a local organization — the Okanagan Rail Trail Initiative — is calling for the rail corridor to become a community pathway from Kelowna to Vernon. Supporters of that initiative may express their interest and learn more about this project on the Okanagan Rail Trail website.

At this time, no decision about the future of the rail line has been announced.

We understand and appreciate the pressing need for safe and legal cycling access to campus on all fronts — from the west and from Highway 97. This is a priority for UBC.

Where our university is able to drive the process, we are. And we are actively working with government partners to ensure the public has safe and suitable public transportation routes to and from the burgeoning neighbourhoods in northeast Kelowna.