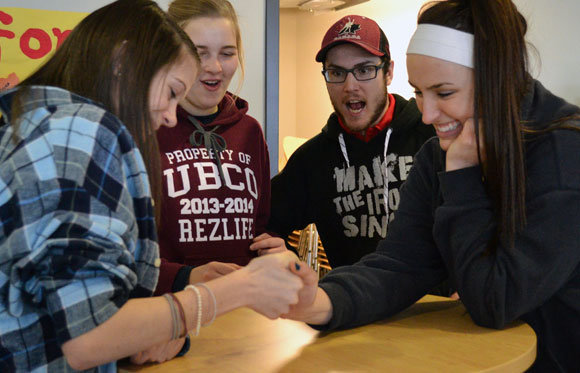 Similympics competitors Aliza Gemma and Nickki Hargreaves thumb wrestle as Hilary Howard and Mark Cianfagna cheer them on in the background.

Student-led initiative brings residents together for fun and glory

On March 1, about 50 residents from the Similkameen residence came together for the inaugural Similympics. Each of the six Similkameen communities put forward a team to compete against each other for the grand prize: bragging rights and the gold-looking trophy.

“We wanted to do something that connects everyone in Simi in a fun way and builds something that’s a little non-traditional,” says Residence Advisor (RA) and second-year student Lyndon Duncan. “The idea was to have a building-wide event that we can enjoy not just this year, but every year.”

The fencing event was the most popular competition of the day. At the event Similympics competitors used foam swords to fence each other, scoring points with every connection to the other player. The winner of each round would go on to fence the next person on the opposing team, which continued until everyone on one team was eliminated.

“We didn’t even win the event, but it was so much fun it didn’t matter,” says resident and first-year student Chloe Elliott. “It was so good to have an event that brought together everyone in Similkameen. Most events are just for people from specific floors and I got to hang out with people that I don’t normally get to.”

Supporting student-led initiatives was the goal of the day for organizers from Student Housing and Hospitality Services. The Similympics were one great step towards bringing Similkameen residence staff and students in a way that was as inclusive and involved as possible.

“Our residence advisor team in Similkameen saw a need to develop a building identity for the residence, and thought a day of fun events for the residents would really build residence and campus spirit,” says Jen Neilands, front office manager for Student Housing and Hospitality Services.

“The event is something that we can have fun with every year. Typically, the Similkameen RAs offer programming for the residents on their specific floor, so the Similympics took things to another level — involving coordination from RAs across campus,” added Neilands. “And everything came together beautifully. We’re so impressed.”

Inaugural Similympics competitors pose for a group shot while Team Purple shows off their gold-looking trophy. 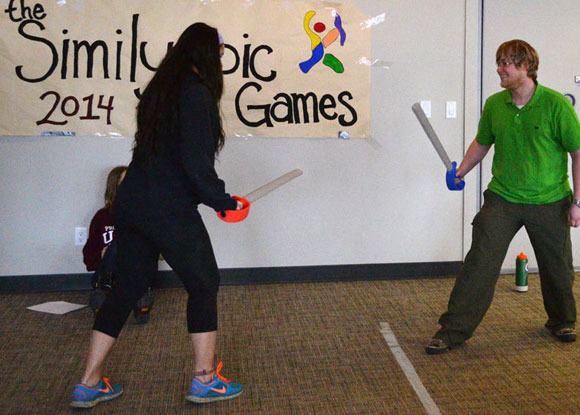 Liv Rohal and Duncan Ritchie face-off in the final fencing event of the day.