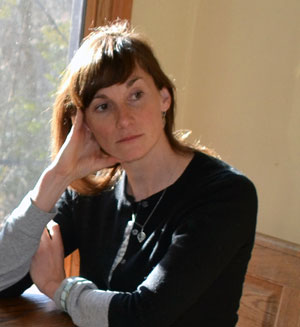 Emily Nilsen is in good company. Nilsen, a master of fine arts student at UBC’s Okanagan campus, has been long-listed for CBC’s annual poetry prize.

Nilsen, from Nelson, BC, is listed with 37 other poets as the best of the bards in this year’s contest. The shortlist will be announced September 8 and the grand prize will be awarded at the end of this month. Two of Nilsen’s poems, As We Bend and Three Poems, were selected from hundreds of submissions to the annual national poetry contest.

“It was a nice Monday morning treat to see my name on the list,” says Nilsen.

This is the first time Nilsen, who has been writing poetry since she was in fifth grade, has entered the contest and she’s excited to be long-listed. The grand prize winner will receive $6,000 from the Canada Council for the Arts, publication in Air Canada’s enRoute magazine, and a two-week residency at The Banff Centre in Alberta. Four other finalists will receive $1,000 each.

Nilsen is working on her master’s degree in UBC’s Department of Creative Studies under the supervision of Associate Prof. Nancy Holmes.

“We are thrilled for Emily,” says Holmes. “She is in exalted company on the long list for the CBC Poetry Prize, a national prestigious prize. This recognition is a terrific boost to the career of an emerging poet and a great honour for any poet in this country, let alone one who is working on her first collection of poems.”

Once she has completed her graduate studies, Nilsen plans to continue writing and exploring the world. Also on the long list this year is Heidi Garnett, a fine arts alumnus from UBC Okanagan.