UBC professor named a fellow of the Royal Society of Canada 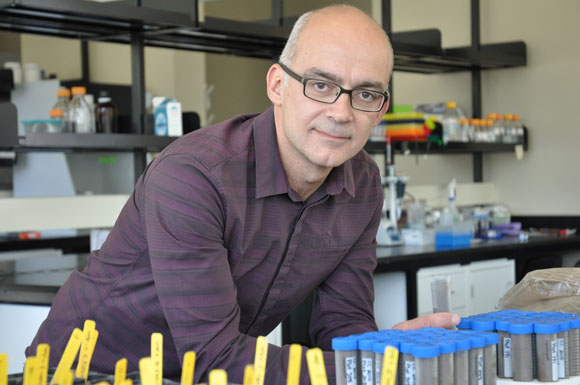 Associate Dean of Research with UBC Okanagan’s Irving K. Barber School of Arts and Sciences John Klironomos has been named a fellow of the Royal Society of Canada.

It is the highest honour to be bestowed upon a Canadian academic.

UBC Okanagan’s John Klironomos, an expert in plant and soil ecology, has been named a fellow of the Royal Society of Canada (RSC).

The RSC made its announcement today, listing more than 90 university academics as the newest fellows admitted into one of Canada’s oldest scholarly organizations. The RSC was established in 1882 with the primary objective to promote learning and research in the arts, the humanities, and the natural and social sciences.

Klironomos, a biology professor and Associate Dean of research with the Irving K. Barber School of Arts and Sciences, says he is humbled by all the attention.

“It is a great privilege and I am extremely grateful to be in that kind of company,” says Klironomos.

UBC Okanagan’s Provost and Vice-Principal Academic Cynthia Mathieson says the university is proud of Klironomos and his research. She notes the recognition brings great honour to the campus.

“As a new fellow of the Royal Society of Canada, Prof. Klironomos’ remarkable contributions to his discipline and to the intellectual life of the academy are greatly honoured,” says Mathieson. “Our campus is enormously proud to count him among our faculty complement and to be part of the formal recognition of a world-renowned scientist.”

“His research is significant because ecologists have traditionally ignored the soil, or at best treated it as a black box,” says Toope. “Prof. Klironomos’ collection of studies, largely through his ability to manipulate and experiment with the diversity and composition of soil biota, has opened the black box and showed that interactions with soil biota are key to the maintenance of plant diversity, composition, and productivity.”

Klironomos’ research on mycorrhizal symbioses and plant-soil feedbacks has had major impact on several disciplines in ecology, says Toope, adding that the popular professor is well known for his creative experimental approaches and his research has made profound contributions to various problems in terrestrial ecology.

Royal Society of Canada President Graham Bell says election to the RSC is the highest honour a scholar can achieve.

“The RSC warmly welcomes this year’s newly elected fellows. These outstanding scholars, artists, and scientists will be joining the society due to their outstanding work in the arts, humanities, and sciences,” says Bell. “By promoting and recognizing these leading intellectuals and researchers, the Royal Society of Canada continues to be on the forefront of significant advances for the betterment of Canada and the world.”

This is second honour presented to Klironomos this year. He was recently named a fellow of the American Association for the Advancement of Science for his contributions to the field of plant and soil ecology, particularly for empirical studies on plant-microbe interactions and the structuring of plant communities.

Klironomos will be officially inducted into the fellowship in November at the RSC’s annual general meeting in Quebec City. He is the second Royal Society of Canada fellow at UBC Okanagan. Prof. Doug Owram received the distinction in 1990.