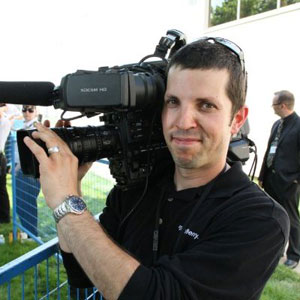 Sam Charles, senior media production specialist with the Media Centre Studio, has been chosen as a videographer for Team Canada at the 2015 Summer Universiade games in Gwangju, Korea.

Staged every two years in a different world-class city, the Universiade is an international multi-sport event organized for university athletes organized by the International University Sports Federation.

It showcases numerous summer sports and is second only to the Olympics in terms of athlete participation in a major sporting event. The twelve-day series will feature more than 9,000 student athletes from over 170 countries.

Charles covered the 2006 Turin Winter Olympics for Shaw TV while creating a manual for Olympic journalists as part of a Jack Webster Foundation Fellowship.

“I was very fortunate to cover the 2006 Winter Olympic in Italy which was an incredible experience — witnessing a large-scale event like that from the outside,” says Charles. “Now as a member of the Team Canada mission staff, I will get to experience and tell the Universiade story from an insider’s perspective.”

Apart from his day-to-day role producing stories for ubco.tv, he is also the play-by-play voice for the UBC Okanagan Heat’s Friday night Game of the Week on canadawest.tv.

“I’ve always enjoyed giving back to amateur sports, especially university sports,” says Charles. “I did play-by-play for York University, UBC’s Vancouver campus, Simon Fraser University and the University of Waterloo prior to my play-by-play duties at UBC Okanagan.”

As videographer, Charles will be responsible for capturing the event and creating a presence through social media for Team Canada.