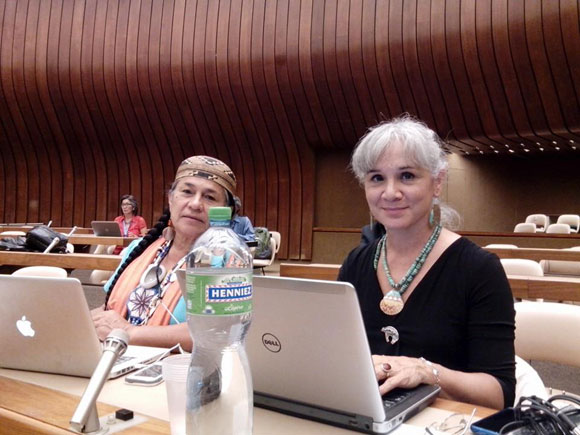 A UBC researcher’s presentation to a United Nations Committee on the Elimination of Racial Discrimination (CERD) has made positive inroads.

Margo Tamez, an assistant professor of Indigenous studies at UBC’s Okanagan campus, is confident her voice, and concerns, were heard. Tamez was an official observer for the Office of the High Commissioner for Human Rights at the 85th CERD Session in Geneva, Switzerland last month.

“I am extremely pleased that the CERD members listened to my presentations when I was given the floor during their session, and they provided further opportunity to speak about my research findings,” says Tamez.

Tamez, who teaches in the Community, Cultural and Global Studies unit with the Irving K. Barber School of Arts and Sciences, has conducted community-based research about the long-term effects that the Texas-Mexico border wall has on the Indigenous peoples. In her ground-breaking research she refers to the wall, which divides the Nde’ traditional territory for more than 70 miles, as gulag-style. Tamez has documented many negative effects the wall has on residents.

The UN CERD committee recently released its concluding observations on the periodic review of the United States and Tamez feels her presentation at the session has made a difference.

Tamez has extensively researched Aboriginal rights in the US. and contributed to a major brief to the Early Warning/Early Action procedure of the CERD body in 2012 which was reviewed at the 85th session. Her research focuses on Indigenous rights claims by the Lipan Apache from Texas. The claims include lack of consultation, obstruction to free prior and informed consent, mass dispossession, and non-recognition of treaty obligations.

“I am also pleased to read in the CERD’s concluding observations that the committee members view the border wall, militarization, racial profiling, surveillance, environmental injustices, religious rights violations, and other impediments to Lipan Apaches’ rights as serious violations of the convention,” Tamez says.

Tamez notes that her research and advocacy, combined with her partnership with the Lipan Apache Band and law experts at the University of Texas, has brought broader awareness of the serious implications of violations for Indigenous peoples, most notably in the Texas-Mexico region.

“Furthermore, my lobbying efforts with CERD members from Ireland, Algeria and Russia proved effective in advancing the race-gender-age dimensions of violations against the convention by the US,” Tamez adds. 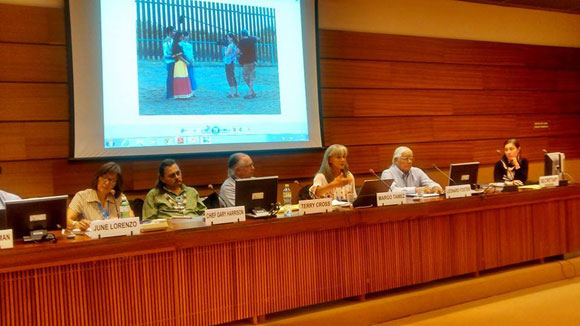 UBC’s Margo Tamez, centre, presents her research on the impact of border militarization and wall structures on Indigenous youth in Texas. Tamez was working with a panel of Indigenous experts on sacred landscapes and human rights at the Palais des Nations, Geneva, Switzerland.