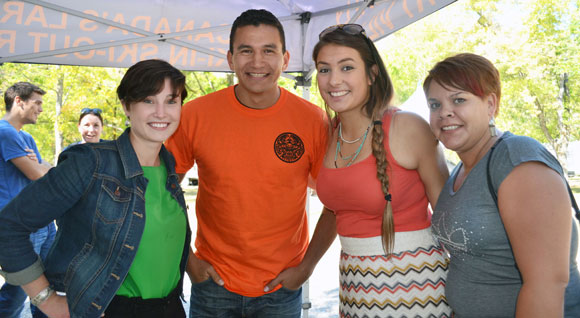 UBC students Kelly Panchyshyn, left to right, Elora Bascello and Mary Song jumped at the chance to be photographed with the charismatic Wab Kinew at the Okanagan Nation Alliance Salmon Feast in Okanagan Falls.

The charismatic Wab Kinew was a hit for both UBC students and staff at a pair of off-campus events earlier this month.

The Aboriginal musician, broadcaster and educator spoke at the Okanagan Nation Alliance (ONA) Salmon Feast and followed it up the next day with a presentation and workshop at the Sensisyusten House of Learning.

“Having Wab Kinew in the Okanagan was such an honour and inspiration to community members of all ages,” said the UBC aboriginal program administrator. “I have followed Wab’s work since I first watched the 8th Fire documentary, as he has such an amazing way of breaking things down into bite size pieces and making ‘living the good life’ seem doable. He walks the talk and uses his education, culture, family and humour to address stereotypes and promote balance.”

“He left us with an opportunity to create our own idea of how we could become a better person, community member and a great leader by asking ourselves, ‘What is a good life? How can I embody that today?’” said Mitton who instructs Writing 009 on campus.

“For me, Wab Kinew’s presentation was uplifting and transformative. What I was inspired most was by how his ideas hold the greatest promise for change. With Indigenous leaders positioned within every level of society: governance, business and educational institutions, change will occur. Only then will we be able to retell Canada’s story,” she added.

Throughout his time in the Okanagan, Kinew promoted and followed a healthy lifestyle. “Self-defeating attitudes are self-defeating prophesies,” he kept reminding the audience.

While talking about the former great Aboriginal leaders, he referred to Tecumseh, a Shawnee who held off American advances in the War of 1812.

“Generals called him the ‘Red Moses.’ They say if he had been born a white man, he would have ruled the world,” said Kinew. “His message is still good today. He warned not to drink alcohol or use substances that rob your spirit.”

The Onigaming First Nation member used many examples of pre-contact leadership. He pointed to a Lakota proverb which stated the chief should be the poorest member of the community. “If you want to be a leader, you should put the well-being of your people first,”  he explained.

Kinew was slated to speak in the Okanagan campus Ballroom on Sept. 23. Unfortunately, the event had to be relocated.

“The ONA approached us to host Wab Kinew here. We were excited about having him speak to our on-campus community and arranged to stream the event from the Ballroom to the student union theatre to accommodate overflow guests,” said Dan Odenbach of Aboriginal Programs & Services. “We then learned he was double booked and the date was moved back one day. With space being a premium on campus, we were unable to secure a suitable venue on short notice.

“Wab Kinew has a great way of focusing on positives. His message of hope is well received by all Canadians and not just Aboriginal People,” added. 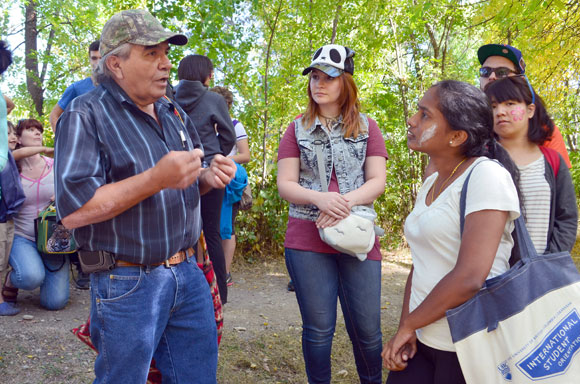