Engineers at the University of British Columbia’s Okanagan campus have developed a lab small enough to fit in your hand but powerful enough to look at microscopic drops of fluid and detect harmful agents such as pathogens responsible for hepatitis, tuberculosis and HIV/AIDS — even acetone in saliva or blood glucose for diabetic healthcare.

The system uses several novel technologies developed by the Advanced Control and Intelligent Systems (ACIS) Lab at UBC, empowered by mostly off-the-shelf electronics such as smartphones. The result is an inexpensive testing laboratory useful anywhere, but of particular benefit in resource-limited settings where the operation of traditional lab equipment is not feasible.

“It’s of great interest for use in places that do not have infrastructure for accurate testing in a timely fashion,” says Assoc. Prof. Homayoun Najjaran, the founder and principal investigator of the ACIS Lab. “To make it really valuable, you want to be able to put the laboratory at the point of care, and this system will do just that.”

Digital microfluidic chips can be made on glass wafers, left, but UBC researchers have developed a screen-printing approach that allows them to quickly “print” several yards of these chips on paper.

At the heart of this point-of-care (POC) lab is an innovative “lab on a chip” — a digital microfluidic processor that precisely controls electrical fields to move sample droplets in and around a chip. Until recently, lab-on-chip circuits were fabricated on glass wafers and cost about $5 apiece — a real bargain, but the researchers thought they could do even better. In consultation with Assoc. Prof. of Printmaking Briar Craig in UBC Okanagan’s Faculty of Creative and Critical Studies, the team developed a new approach using conductive ink screen-printed onto paper.

Now one can have hundreds of chips for $5. Najjaran says the entire laboratory could get to the user for under $100.

Najjaran and his team of engineers developed the electronics that need only a small rechargeable 3.7-volt battery to power up the entire point-of-care (POC) lab with several hundred volts and manipulate the droplets of sample fluid. And it’s all monitored and controlled via Bluetooth wireless commands from a smartphone.

Right now, the device is a working prototype and researchers are seeking an industry partner so they can refine the technology for commercialization. The team is already working with colleagues at UBC, McGill University and other institutions — including Canada’s National Design Network — to develop applications for the device.

“Other potential applications include chemical weapons detection — looking for signs of mustard gas, sulfur, or bio-hazards. And we know there is also interest in developing pathogen detection for food and beverages,” says Najjaran.

“We have the device, now let’s do some detection.” 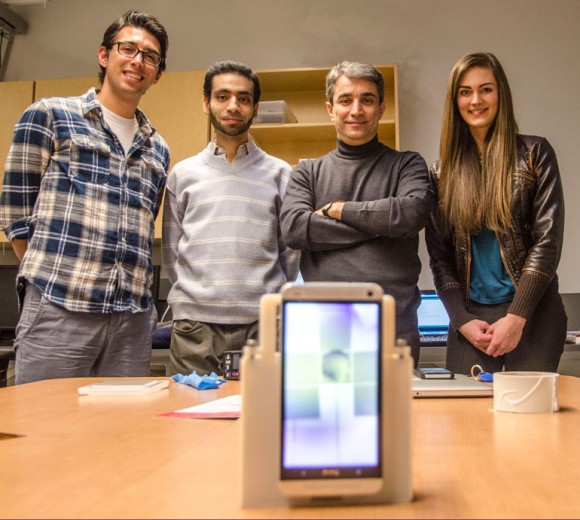 “We have a system that is more user-friendly than anything before and we can build the whole thing for under $100,” says Najjaran. “With industry support, we can explore further integration of the controller into the phone. For example, much of the device’s electronics could be reduced to a single integrated circuit.”

Najjaran and his biochemist graduate students are collaborating with engineering Assoc. Prof Mina Hoorfar as a multidisciplinary research team to develop a rapid POC device for early detection of HIV and TB at the same time.