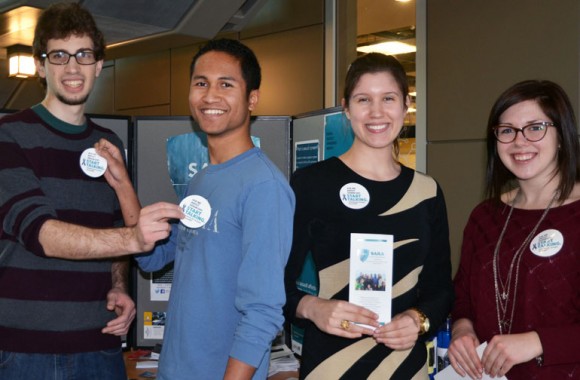 It’s a simple statement of solidarity and support. Students, faculty, and staff at UBC Okanagan are being encouraged to wear denim to campus on Wednesday, January 21 to support Sexual Assault Awareness Month (SAAM).

SAAM is organized by the Sexual Assault and Rape Awareness (SARA) group, a student-led movement that has grown significantly since its first event in 2011. Since then, several universities have undergone criminal charges and media scrutiny for frosh chants with sexual connotation, date rape crimes, and even a Facebook group at one university that targeted female students as potential rape victims.

Denim Day is one of the key events of SAAM at UBC Okanagan this year, explains student Lauren Gaudet, currently working toward her Masters in Social Work. She says the entire campus is invited to show solidarity and support against sexual assault by wearing denim and/or a Denim Day sticker.

“This year, UBC Okanagan is pleased to be participating in this joint-campus initiative that also allows for education and proactive dialogue around issues of sexual assault,” says Gaudet.

SARA volunteers will be handing out Denim Day stickers at several booths across campus Monday, Tuesday, and Wednesday, and will be in the Engineering, Management, Education building from 11 a.m. to 2 p.m. Tuesday and the Fipke Foyer most of Wednesday.

UBC Okanagan’s SARA program began as an educational booth which ran for three days in 2011. It has now grown to be an established program at the Okanagan campus through its preventative efforts and education provided to the community on sexual health, consent, healthy relationships, and how to be a proactive bystander against rape culture.

“SARA, alongside many on-and off-campus partners, are developing a best-practice manual for staff, faculty, and students on how to respond to reports of sexual assault, support survivors, navigate systems of justice, among many other essential guidelines,” says Gaudet.

She notes two other initiatives currently being created are International Student Awareness Month in February and Aboriginal Student Awareness Month in March. SARA has partnered with International and Aboriginal student leaders in creating cross-cultural as well as culturally sensitive educational and promotional materials that will be used for the campaigns, she adds.

“SARA is proud to be hosting Denim Day 2015,” adds Gaudet. “This is just another example of how UBC Okanagan stands united as a community against sexual assault and rape culture.”

Gaudet explains that in 1998 an Italian court overturned a rape charge because the victim was wearing tight jeans. The ruling stated that because the victim’s jeans were tight, she had to have helped remove them and as a result gave consent to her attacker. Enraged by the verdict, people around the world launched into protest, showing support for the victim by wearing denim to their places of work.