How does this globally known footballer affect society, and why should we care?

With more than 100 million Facebook fans, a museum dedicated to just him, and a blossoming career as a male model with his own line of clothing, there is no doubt that Portuguese soccer sensation Cristiano Ronaldo is known for more than just his skills on the pitch.

Luis LM Aguiar, associate professor of sociology in UBC Okanagan’s Irving K. Barber School of Arts and Sciences, is so intrigued by the superstar media attention Ronaldo receives that he is teaching a university course on the sociology of Ronaldo.

“Ronaldo is regularly followed by the paparazzi and scrutinized for his hairstyle, physique, celebrity status, and love life,” says Aguiar, who is also from Portugal. “Ronaldo is also arguably the best footballer in the world today with three Ballon d’Or awards, the most recent awarded just last month.”

But why should we care? And why should UBC Okanagan organize a for-credit, fourth-year sociology course on a fellow who plays football halfway around the world?

Aguiar says Ronaldo’s appeal goes well beyond the soccer pitch; the fact that he’s on top of world with his career, and has social and cultural appeal to not only football fans, makes him an interesting study.

“Sociology is nothing if not the delving into the processes of structuring identities and experiences and exposing the social forces that push these processes,” says Aguiar. “In this case, I’m interested in how Ronaldo has been used to construct several discourses about who he is, what makes him distinct as a footballer, what is his relationship to Portugal, Madeira (his hometown) and indeed Portuguese identity.”

It’s not a casebook study about the global popularity contest (which Ronaldo may be winning), says Aguiar. Students in his class will learn about the sociological relevance of social phenomena like organized sport and the forces that create a global athlete. Students will also learn about identity, nationality, and representation, and will discuss the phenomenon of Ronaldo across the Portuguese diaspora.

Not every student in the class of 20 is a football fan. In fact Billie Franck, a fourth-year sociology student, admits the name was vaguely familiar, but she didn’t sign up to learn more about Ronaldo. She was intrigued by the ever-growing popularity of this 30-year-old footballer. With his own line of clothing, the world’s most recognizable athlete made Forbes Magazine’s richest celebrity list for 2014, has graced the cover of dozens of health and fashion magazines, has more than 31 million followers on Twitter, and even has his own downloadable app.

“I’m curious about this elite standard that he’s created,” says Franck. “How do people become so famous and how are they revered when famous? There is certainly a cultural phenomenon about his popularity.”

Fourth-year student Landon Lacroix is interested in the ‘global citizenship’ of Ronaldo and is curious about how much impact one person can have culturally, spiritually, and financially on society.

“Sport is a huge part of Canadian culture, even though much of our focus is on hockey,” says Lacroix, a former soccer player. “It’s interesting to look at this global citizen and see how he became this way and how such a super star relates globally.”

During the semester-long course, students will examine the stereotypical image of the Portuguese  and discuss the Portuguese diaspora and Ronaldo’s place in it. While a passionate Portuguese, Ronaldo plays for rival Spanish club Real Madrid.

“Ronaldo is said to embody features and characteristics of speed, strength, competiveness, dogged work ethic, discipline, and adaptability,” says Aguiar. “These features are also in a sense ‘very Portuguese’ since the Portuguese outside the homeland are nothing if not constructed as hard workers, disciplined and determined. Even as a global athlete transcending geographical boundaries, Ronaldo cannot  escape the stereotypical constructions of ‘the Portuguese’.”

“My two greatest passions are football and critical sociology. A course on Cristiano Ronaldo gives me the opportunity to combine the two,” says Aguiar. “While I’m an admirer of Ronaldo, I’m also a sociologist interested in understanding the social and economic forces driving the various constructions of this athlete and what this says about our contemporary values and culture.” 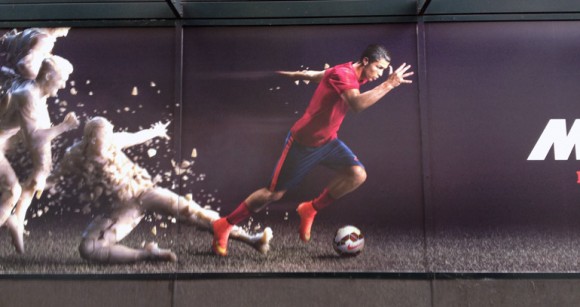 Ronaldo is everywhere. This photo was taken by UBC’s Luis LM Aguiar at a downtown Seattle mural. 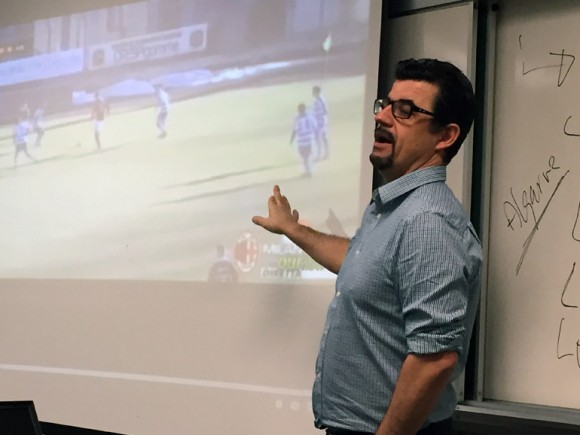 UBC Okanagan Associate Professor Luis LM Aguiar uses a variety of media sources to teach about the sociology of Cristiano Ronaldo. The soccer super star is the subject of a new fourth-year course offered at UBC.