A new stage show presented by UBC Okanagan and Theatre26 explores the madness and isolation, joy and elation experienced by professional clowns on the road.

Marooned debuts Feb. 19, bringing a slice of surreal life from UK- and Toronto-based artists Aron De Casmaker and Jesse Buck, who spent five years on tour as principle clowns in Cirque du Soleil’s production Alegria. With stops around the world—from Serbia and Siberia, to Idaho and Hawaii—the hit show toured through Kelowna in 2010.

“We had the opportunity to refine our art form—that is the dream, the yin to the yang,” he says. “But after a time, you feel like you’re touching down on strange planets. The audiences and cultures were fantastic, but they reveal a great deal of absurdity, too.

“You invest every inch of your capabilities—playing against the stigma, sometimes melting a wall of disdain audiences have for clowns—and become the life of the party. Crowds start to love you. You create a connection. Then it’s over; you go back to a hotel room and you’re alone.”

No Clown is an Island

De Casmaker says the otherworldiness of life on the road creates a sense of isolation, where nothing is familiar. It brought the duo even closer and sharpened their powers of observation, which they refined into the concept of two clowns marooned on a strange, deserted island.

“That’s our perspective,” he says. “But it’s also about each individual’s personal choices in life, like those ‘sky-diving decisions’ where you’ve jumped out of a perfectly good plane—now what?”

Friends for 20 years, since high school in Ottawa, De Casmaker says he shares with Buck a love of dark comedy.

“We both have a very stupid and absurd sense of humour. Clowning just took on a life of its own. And then we got to train in Paris under clown master Philippe Gaulier—he’s like Yoda, only French.”

Over the course of five years in Cirque du Soleil’s world-renowned production company, they learned to specialize and hone their talents until they became “acrobats of stupidity.”

Marooned audiences can expect a PG-rated show full of comedy, absurdity, surprises, multimedia interaction—and a certain “sleight of hand to charm and trick audiences into laughing.”

De Casmaker and Buck are currently artists in residence for the Faculty of Creative and Critical Studies (FCCS), where they’re preparing to unveil Marooned for Okanagan audiences. (In Kelowna for the winter semester, De Casmaker is also teaching two full-time courses in FCCS: Clowning and Theatre Devising.)

Developed over several years, the original work has received support from Cirque du Soleil and the National Theatre School of Canada in Montreal.

Marooned is the fourth of five productions in the 2014-15 FCCS Performance Series, presented by FCCS, Theatre26, and Inner Fish Performance Co. The series is made possible through the generous support of the Central Okanagan Foundation. 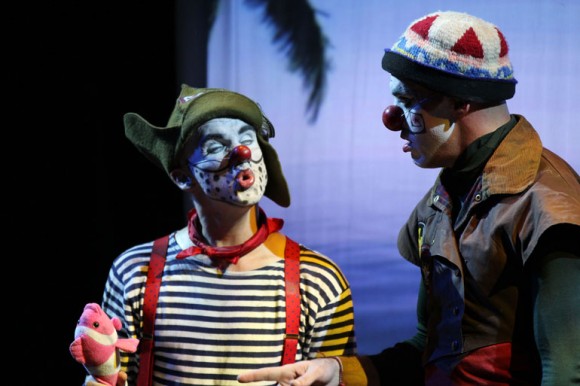 Aron De Casmaker and Jesse Buck in a scene from Marooned. 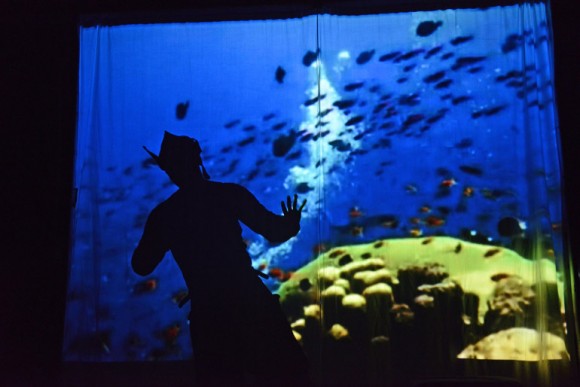 A scene from Marooned, playing Feb. 18-28 at UBC’s University Theatre.