After two decades on the court, coach Semeniuk retires and hangs up the hightops 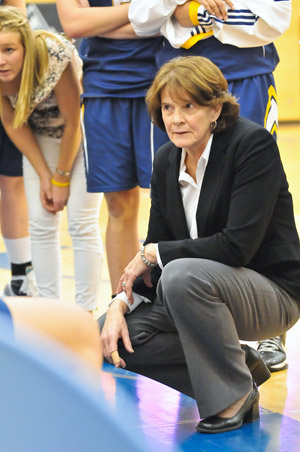 “Family comes first” is the motto of UBC Okanagan’s Heather Semeniuk, who is retiring after spending the past 21 years as coach of the Heat women’s basketball team.

The game has always been a passion for Semeniuk, and her on-court and off-court contributions will be remembered for years to come by former players and colleagues who refer to her affectionately as “Coach Sem.”

It hasn’t been an easy decision. Coach Sem says, despite her passion for the game, it is the people and the relationships, not the game itself, that brought her back to hoops year after year.

“We as people are important, not as numbers, not as anything else,” Semeniuk says. “I don’t consider this a business. I consider it a career, something that I am passionate about, and that’s who I am. And that’s why I say this is about people and not anything else.”

Since 1994, Semeniuk has guided a total of 125 players from 61 different high schools. She credits the arrival of UBC in the Okanagan as a big factor for keeping and growing the program’s diversity.

“I love walking around campus and seeing the diversity,” Semeniuk says. “It is just fantastic! If I were to go back to school, this is where I would want to go. I really love the feeling here.”

The basketball genes are strong in Coach Sem’s family. She is the mother to four children, all of whom have played basketball. Two of her boys—Darren and Mark—have at one time served as Heat head coach and assistant coach, respectively.

Semeniuk’s last matches behind the Heat bench are home games against. Tonight, Friday, February 13, she officially puts away the white board for the last time.

Pending the pair of games against the Timberwolves, Coach Sem retires with 376 total conference regular season (196 wins, 180 losses, .521). She has been a head coach for 29 conference championship games (16-13) and 10 games at a national championship (4-6).

Semeniuk is seen as a great mentor to many who have come through the program, and she has always been ready and willing to help where she can.

“Even though academics does come first, and basketball comes second,” she says, “I have always told the students that family really comes first. That’s just what I believe. Family is where they came from, and it’s who they lean on. That’s the foundation.”

She admits that her role as a mentor has grown as much as her coaching style and knowledge of the game. It’s largely built on trust.

“If I can help them with a problem, then they know they can rely on me, then I am building a relationship where there is trust. We can believe each other because we’ve got each other’s backs, just like on the court. And I like that.”

Twenty-one years is a long time for anyone to remember all of the details therein, but regardless, Semeniuk stresses her memories and her legacy will rest primarily on the shoulders of her relationships and experiences with everyone she had the opportunity to interact with along the way.

“There have been so many fantastic women,” she continued. “The relationships, the friendships, and the connections you make, they’re now lifelong for me. Girls are having families, getting married, having children, life is just evolving for everybody. Now I get to share in their lives in a different dimension.”