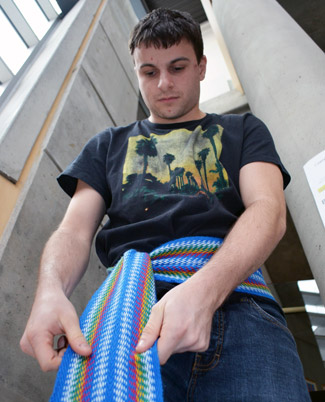 Aboriginal student Dexter James adjusts his Métis sash prior to the Louis Riel Day celebration in the Fipke foyer. The math tutor is waiting to hear if he is successful in getting into the UBC Faculty of Medicine’s Southern Medical Program.

Showcasing his Métis heritage on campus was a milestone in the cultural journey of Dexter James.

The fourth-year Barber School science student jumped at the chance to play a role in hosting the Louis Riel Day celebration in the Fipke foyer recently.

“It was an opportunity to share my Métis culture with many of my First Nation friends. It was my first time making bannock.  I’ve enjoyed it many times but never made it. Being able to make it and then share it with people was a rewarding experience,” said the Vernon & District Métis Association board member. “It felt great to see how interested many Aboriginal and non-aboriginal students were in the cultural artifacts which Dennis (Weber) brought in.

“Feeling the items really makes the interaction with the artwork an intimate experience. It makes you stop and think to what life was like for our ancestors. I believe when we maintain our culture, it’s a way of both honoring our ancestors and strengthening ourselves.”

Louis Riel, a politician, is considered to be the founder of the province of Manitoba and the political leader of the Métis Nation. He was hanged for treason in Nov. 16, 1885. Like many Aboriginal People who grew up away from their culture, James did not fully appreciate the role and sacrifices his ancestors played in the history of Canada.

“I used to be ashamed of my Aboriginal culture. I felt like not saying anything about it would keep a target off my back. But over the past four years, I’ve grown as an individual by accepting my Aboriginal heritage and embracing it, rather than hiding it,” said James who also works as a math tutor in the Aboriginal Centre. “I know it’s always been part of who I am, but I felt alone.”

“It’s important for everybody here to see Elders. To come out and see what we do,” said the personable Hill between sets. “Most people don’t know what it’s all about.”

Dennis Weber is a talented Okanagan-based artist who traded many of his creations for the artifacts on display. His array of artifacts include animal pelts, ceremonial items, skinning knives and various flutes which he played, complimenting the fiddle music.

UBC Equity and Inclusion Office Educator Jenica Frisque dropped by the celebration and was pleased by the amount of artifacts on display.

“What I enjoyed most about Louis Riel Day were the artifacts that Dennis brought for display. He explained to me how the type of wood a flute is made of influences the sound of the flute. He played a few notes from different flutes to demonstrate and he even let me try one out,” said Frisque. “Being able to hold a hunting knife with a handle made from a bear’s jaw bone and inspect the delicate bead work on a moccasin, coupled with conversations with members of ACES (Aboriginal Community Elders Services), helped me to appreciate the complexities and creativity of Métis heritage and culture.” 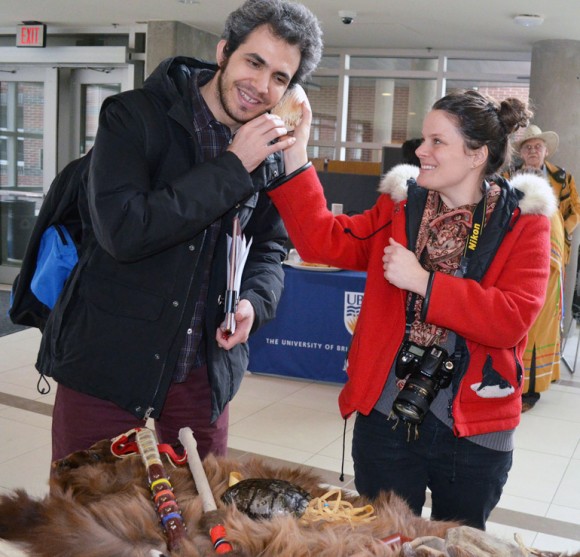