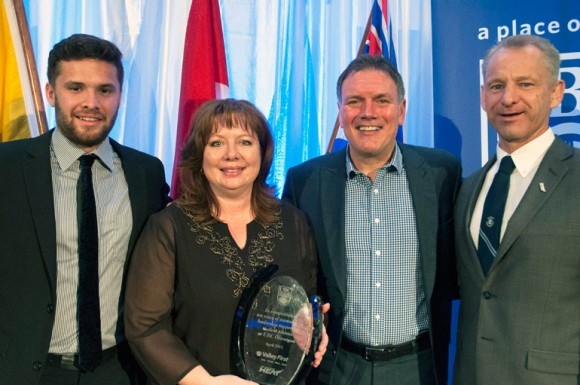 Bob Lenarduzzi, former player and now president of the Vancouver Whitecaps, told a sold-out crowd gathered to support student athletes that investing in young student athletes is an investment in Canada’s future.

Lenarduzzi was the featured speaker at the 10th annual Valley First UBC Okanagan Athletics Scholarship Breakfast Friday morning. He has been involved with the football club for more than three decades, excelling as a player, coach, general manager, director of soccer operations, and now as club president.

He started playing with his hometown Caps in 1974 in the North American Soccer League and he was a key member of the 1979 Whitecaps NASL Soccer Bowl championship-winning team. In 2009, Lenarduzzi was instrumental in securing Vancouver’s Major League Soccer (MLS) franchise, and establishing the Whitecaps of today.

Lenarduzzi, who started playing professional soccer at 14, represented Canada 47 times as a player and qualified for the 1984 Olympics and 1986 FIFA World Cup Mexico, was inducted into the Canadian Soccer Hall of Fame and Museum.

“Playing for Canada is an incredible opportunity,” said Lenarduzzi. “Anytime you can do that in any game is a proud moment, but pulling on your jersey for a World Cup game was such an honour. We established around the world that Canadians don’t just play hockey—we play soccer, too.”

Spending most of his career developing football in Canada, Lenarduzzi stressed the importance of player development and support for young and upcoming players. The Whitecaps has a residency program for young players, and Lenarduzzi says his team is recognized as one of the few that builds its roster with young developing players. There are currently eight homegrown players on his team, the most in the MLS.

Angela Brown, Valley First’s Assistant Vice-President, Marketing, Engagement and Community Investment, used the breakfast to encourage audience members to “imagine what’s next,” and to imagine the future as the community continues to invest in and support student athletes at UBC’s Okanagan campus.

“When I think ‘what’s next’ it makes me reflect on the last 10 years of this event, the countless student athletes who have been able to follow their dreams because of what we as a group have committed to,” she said. “But then it makes me look forward, gaze into that crystal ball, and really think about the future. I encourage you to look at your own organizations and see how you could contribute to the ‘what’s next’ for the athletics scholarship program.”

Student athlete Manny Straith, who has captained the Heat men’s soccer team for the past three seasons, took a moment to thank the many sponsors who supported varsity athletics at UBC Okanagan. Support from the community allows players to focus on their academics, and then their sport, as all Heat players are expected to excel in the classroom. Straith works part-time at UBC’s Hangar Fitness Centre and says by 6 a.m. the gym is full of varsity athletes.

“When I see my fellow athletes working so hard for something they love, I know they can’t do it without your financial support,” Straith said. “Support from you means that we don’t have to decide between working, or training and studying. I’m standing here today because of the support from people like you.”

Indeed, UBC Okanagan’s Director of Athletics and Recreation Rob Johnson, told the audience that being a UBC student athlete requires a substantial commitment of time and effort throughout the entire academic year. UBC is dedicated to providing the financial support to these students and the Athletics Breakfast Scholarship Endowment is vital to this support.

Just as the breakfast was coming to a close, Lois Serwa—grandmother to local Olympian and UBC Human Kinetics student Kelsey Serwa—challenged all service clubs and organizations to support varsity athletics at UBC Okanagan.

“Just imagine if every service club in the area were to support and adopt an athlete,” Serwa said, explaining that Okanagan-Mission Rotary Club has done just that. The Adopt-an-Athlete is a fundraising program run by UBC Okanagan’s Athletics department.

UBC matches every dollar raised at the Valley First/UBC Okanagan Athletics Breakfast. Over the past 10 years, more than $500,000 has been raised for the Athletics Scholarship Endowment. As a result, $12,800 in awards is available to student athletes this year.