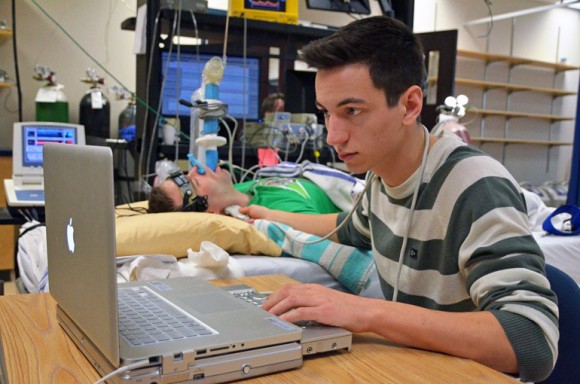 Ryan Hoiland, graduate student in the School of Health and Exercises, conducts breathing and blood-flow testing on volunteer Stirling Steeves at UBC’s Centre for Heart, Lung and Vascular Health.

As an undergraduate student in the School of Health and Exercise Sciences, Ryan Hoiland travelled on a scientific expedition to Nepal, working in the shadow of Mount Everest to study the effects of severe oxygen deprivation – hypoxia – and blood flow to the brain. Now his work as a graduate master’s student is paying off in new understandings about human physiology – based on UBC Okanagan research conducted at the international Pyramid Laboratory near Everest Base Camp.

Hoiland has published three research papers as lead author in prestigious academic journals, and his studies are producing new insights into adverse human health effects. One, in the high-impact clinical journal Chest, uses data collected by his supervisor, Prof. Phil Ainslie, from the 2012 Everest trip where Hoiland was a research assistant and test subject. The study also incorporates data from one of Ainslie’s previous Everest trips.

Key differences emerged from the mountain testing, done over two weeks under actual high-altitude conditions, with previous controlled-condition sea-level testing in normobaric pressure chambers that manipulated body responses for only a few hours at a time. The data sets uncovered disparities.

“We found that there is no relationship between responses at sea level compared to high altitudes,” says Hoiland. Things such as blood viscosity (i.e., the thickness of blood) differences at high altitude were not replicated in the sea-level data. “One of our conclusions is that there is a limited ability of sea-level tests to predict high-altitude outcomes.”

The study results will be useful in furthering the knowledge around predicting health outcomes in patients suffering from a host of cardio-pulmonary problems.

Hoiland’s second study is published in the Journal of Physiology, exploring the relationship between brain blood flow and breathing. This research compared human data over the last 25 years, even linking to animal studies done in the 1950s. Those earlier human studies measured blood flow response to brain regions not responsible for the control of breathing, a severe limitation.

“It’s an area that’s been explored but due to technological advances, we wanted to revisit this,” says Hoiland. So using methods and equipment unavailable years ago, Hoiland re-tested old hypotheses – but measured blood flow to the posterior portion of the brain – including flow to the brain stem, the area that controls breathing.

The findings? The posterior brain blood flow measures showed that during hypoxia—decreased oxygen flow to the brain, as occurs during a stroke—breathing increases, plateaus and then decreases, with the relative decrease in breathing related to the blood flow response.

“This has not been measured before,” says Hoiland. The key discovery is that blood-flow responses act to reduce the breathing changes and blood oxygen levels brought on by hypoxia.

Such research had never been conducted measuring posterior blood flow, as opposed to the historic, anterior brain studies. Research of this kind provides insight into the underlying pathology of disordered breathing, such as that occurring during sleep apnea.

“The importance of publishing research at this stage of my career is huge. These studies, while providing scientific impact, will also impact my future applications for PhD funding, post-doctoral funding, and even for faculty positions,” says Hoiland, who credits Ainslie’s guidance and supervision, as well as the UBC’s Centre for Heart, Lung and Vascular Health, for contributing to the success of his research. “He has provided me with an amazing opportunity to learn and grow as a researcher here at UBC Okanagan.”

Ainslie, Canada Research Chair in Cerebrovascular Physiology and co-director of UBC’s Centre for Heart, Lung and Vascular Health, has been to Everest eight times to study physiological change at high altitude and is planning another expedition in 2016. Later this year, Ainslie, Hoiland and other graduate students from their group will conduct new research on California’s White Mountain, at an altitude of 3,800 metres.

Hoiland’s research can be found at: 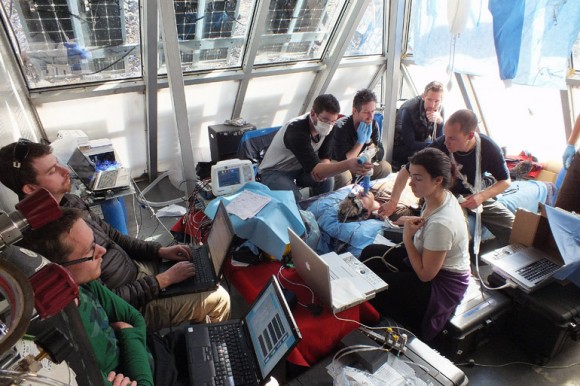 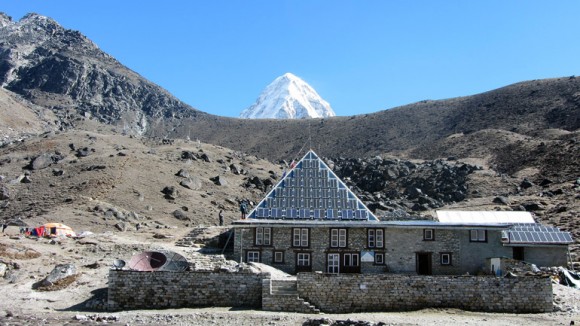 The Pyramid International Laboratory is where a UBC team led 25 international researchers on a six-week scientific expedition in 2012.