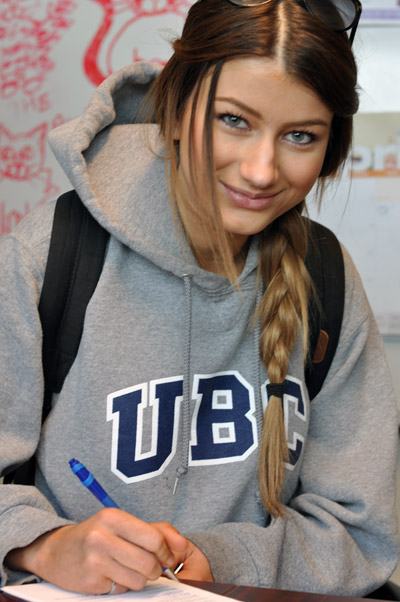 As a Miss World Canada finalist, Ena Vehabovic is encouraging young girls to think about careers in applied science.

Ena Vehabovic is used to being outside her comfort zone.

As one of 22 women among the 150 fourth-year Engineering students at UBC’s Okanagan campus, Vehabovic wants to improve the gender balance and encourage more women to pursue engineering. Next week, she will have a national stage for her message as one of 50 finalists for the Miss World Canada pageant in Vancouver.

“I’m stepping way out of my comfort zone and taking a risk by participating in this event,” she says. “I’m incredibly nervous and excited but I’m hoping that by showcasing myself as a female engineer in such an event I can be the role model I never had.”

The annual seven-day Miss World Canada pageant starts May 10 and brings contestants from across Canada for a week of rehearsals, competitions, VIP events, and the final gala evening when winners are crowned. Men are also encouraged to participate in the Mister World Canada event, which runs simultaneously. Top winners then enter the international competition to become Miss and Mister World pageant participants.

Vehabovic is quick to point out that Miss World Canada is not a beauty contest. It’s a major fundraiser for Variety Club, in which contestants focus on humanitarianism or philanthropy, with the goal of inspiring hope and enriching the lives of children. Her goal is to introduce young girls into the academic world of applied science. Vehabovic feels that too many females shy away from careers in sciences or aren’t encouraged towards science-based programs.

“I want young girls to know that you can like things like pretty hair and makeup and be wonderfully female and at the same time you can be good at math, sciences, and engineering,” she says. “Engineering needs a female’s perspective. It’s a science that is all around us and women haven’t had much of an influence.”

The number of female School of Engineering students at UBC Okanagan has increased significantly over the past few years; last September, 42 of 190 first-year students were women. The university has recognized the need to recruit more females into the program, recently creating the Women in Engineering (WiE) support program.

“We established WiE to develop innovative programming to help retain, support, educate and empower our female students,” says Engineering advisor Renee Leboe. “From leadership development to outreach events, and mentoring, our female students are supporting one another through a variety of programs offered by Women in Engineering.”

Vehabovic would love to see a balanced ratio of women and men in engineering.

“I want to be a female engineer and I want all young women to know that those doors are open to us all,” says Vehabovic. “But in order for this to happen, there needs to be risks taken so that other young girls can step out of their comfort zone and into this male-dominated career.”

As part of her studies, she has completed a year-long project helping to design structures that can be used for housing when natural disasters, such as the Nepalese earthquake, take place. The portable structures, when complete, will be inexpensive to produce, easy to put together, and light-weight for quick disposal to a disaster zone.

“Even if a few girls think ‘hey, if she’s an engineer, I can be an engineer, too,’ I’ll be more than happy,” says Vehabovic, who hopes to graduate as a civil engineer in June. “I hope I can create a path that can later become a common road for young girls looking to pursue engineering and sciences.”