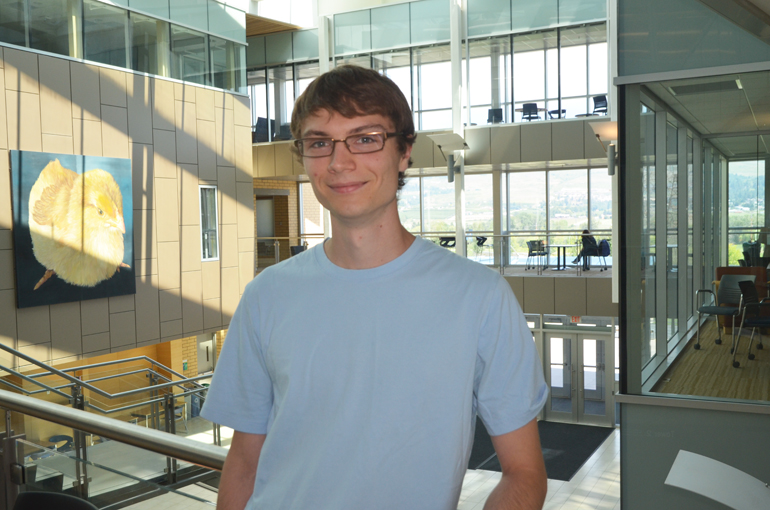 Few students publish scientific research as undergrads – and fewer yet are tapped as lead authors by their profs. But double-honours computer science and math student Yasha Pushak, winner of the 2015 $10,000 Pushor Mitchell Gold Medal Leadership Prize, found himself in that rarefied air.

Pushak spent two summers working as an undergraduate research assistant, and co-authored four publications during his four years at UBC Okanagan. His first paper, which he worked on with his professors and thesis supervisors, Warren Hare (mathematics) and Yves Lucet (computer science) was submitted to the European Journal of Operations Research, one of the top journals in its field.

“Yasha’s contribution was so high, that Dr. Lucet and I decided to list him as first author,” says Hare. “Mathematics research has a ‘when in doubt, go alphabetical rule,’ and breaking this for an undergraduate student is exceptional.”

It is only the latest accolade for Pushak, graduating Friday at UBC’s 2015 Spring Convocation. He has garnered more than 10 scholarships and awards as a student in the Irving K. Barber School of Arts and Sciences.

In addition to being a stellar scholar and prolific researcher, Pushak has been instrumental in promoting the work of math and computer science undergraduates, connecting students and building relationships. Pushak participated in the Canadian Undergraduate Mathematics Conference, and was so enthusiastic about it that when he learned no such event existed in computer science, he decided to organize the very first Canadian Undergraduate Computer Science Conference (CUCSC) at UBC Okanagan.

“My drive to lead CUCSC to success is rooted in the inspiration I found attending the undergraduate math conference,” says Pushak. “My dream is to pioneer a life-changing conference that will be held year-after-year, inspiring students for generations to come.”

Acting Dean Barbara Rutherford calls Pushak a rising star, whose time spent as a teaching assistant, tutor and organizer will have a lasting impact on future students.

Mark Baron, managing partner at Pushor Mitchell LLP, says that Pushak is a worthy recipient of the award, which the firm created to recognize students who excel academically and also demonstrate leadership in community service or volunteerism, cross-cultural relations, promotion of diversity, intellectual pursuits, and artistic or athletic endeavours.

“Academic excellence is a commendable achievement, but to find a student who can excel academically while finding meaningful ways to give back to the community is a rarity,” says Baron. “Through his outstanding research contributions, academic accomplishments and publications and proven dedication to the campus and broader community, we as a firm are proud to recognize Yasha Pushak with this award.”

“I am honoured to receive the Pushor Mitchell LLP Gold Medal in Leadership Prize,” says Pushak. “The most rewarding aspect of leadership and community service is the impact we can have on the lives of others. By recognizing and awarding scholarships to students like me, Pushor Mitchell LLP is helping support us financially in both our academic achievements and our endeavours to give back to our communities, and I want to thank them for this generous award.”

Pushak moves to UBC Vancouver this fall to begin a graduate degree, majoring in computer science with a focus on mathematics. He has received several entrance scholarships and awards.