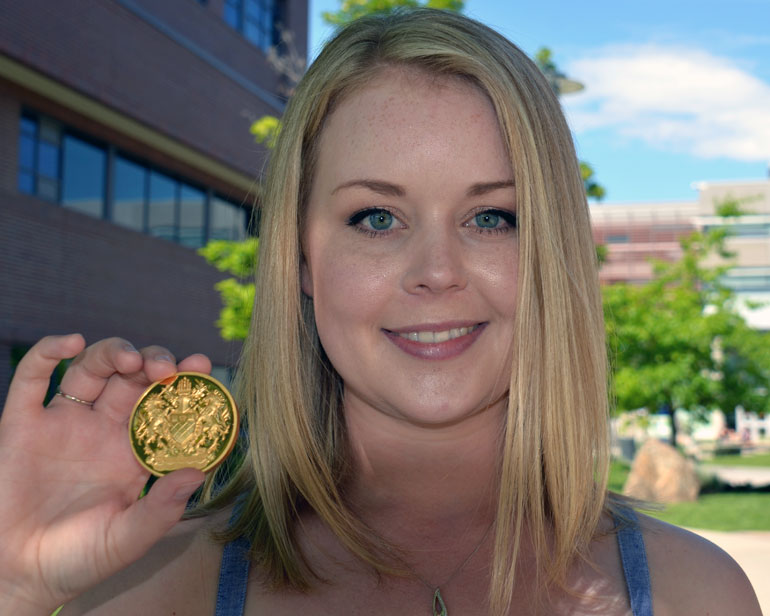 After five Convocation ceremonies stretched over two days, degrees were conferred on more than 1,600 students from UBC’s Okanagan campus, now launching into the next chapter of their lives.

Among them is Caitlyn Makins, recipient of the Governor General’s Gold Medal Award for top graduate student. She was conferred a PhD in biochemistry and microbiology from the Irving K. Barber School of Arts and Sciences during the second and final day of Convocation ceremonies at UBC.

In her graduate studies, Makins was awarded more than $200,000 in grants from the Natural Science and Engineering Council of Canada. She also published five academic papers in the respected Journal of the American Chemical Society. Under supervisor Kirsten Wolters and faculty member David Jack, she developed a passion to research the role of human enzymes.

“I study how enzymes speed up reactions in the body and then look at ways to manipulate them to make new compounds,” said Makins.

“My aim is to adapt these systems and develop anti-viral therapeutic drugs that will improve people’s lives,” said Makins, who will pursue post-doctoral studies at the University of Michigan.

During Convocation, UBC leaders and honorary degree recipients told graduates how the world is ready to embrace their new skills, knowledge and quest to make change.

Chancellor Lindsay Gordon said as UBC enters its 100th anniversary and 10th anniversary of the Okanagan campus, graduates can look with pride on the cultural and ethnic diversity of their university, province, and country.

Gordon noted both campuses occupy unceded Aboriginal territories, on the Musqueam lands of Vancouver and on the territory of the Okanagan peoples in Kelowna.

“UBC has enjoyed decades of support, friendship and cooperation with a great number of Aboriginal leaders and communities, from whom we have drawn inspiration for the development and implementation of UBC’s Aboriginal Strategic plan,” Gordon said. 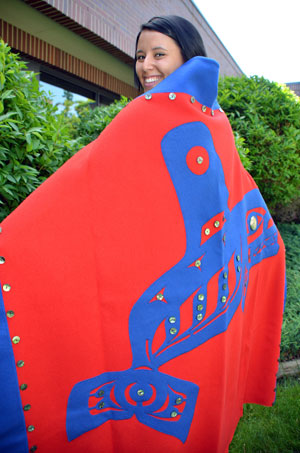 Kayla Williams of Whitehorse Kwanlin-Dun First Nation’s Tlingit People is resplendent at Convocation Friday in the robe created by elders. Kayla graduated with a bachelor of science degree from the Irving K. Barber School of Arts and Sciences.

UBC President Arvind Gupta told the graduating classes that much has been invested in their success.

“You – we – all have the capacity to be a part of the solution to global challenges,” Gupta said. “For you, it may be about addressing income inequity through novel financial instruments – or coming up with a way of thinking about the environment that gets us closer to global climate change solutions – or creating a new model for social interactions that leads to Internet tools unimaginable today.”

Deputy Vice-Chancellor and Principal Deborah Buszard told students that as the final graduating class of the first decade of UBC’s Okanagan campus, they have made a tremendous contribution that in turn will transform the world.

“Be tenacious. Be flexible. Be bold. Be open to new opportunities. Seek them out. Be prepared to pursue paths you didn’t anticipate, because there will be many more of those than the routes you may have planned.”

Philip Currie is an internationally renowned palaeontologist whose accomplishments have led to a greater understanding of dinosaurs and their significance in Earth’s evolution. Currie is currently professor and Canada Research Chair in Dinosaur Paleobiology at the University of Alberta.

Sara Seager is a Canadian-American astrophysicist, planetary scientist and a professor at the Massachusetts Institute of Technology. Her work and research focusses on theory, computation, and data analysis of planets orbiting stars far from our own solar system.

Roshan Thomas was nearing completion of a PhD in curriculum studies through the Faculty of Education. She researched ways to include the voices of women in designing curriculum for early childhood development programs that takes into consideration the values and culture of the Afghani people.  Her work is important because there are few appropriate curriculums for early childhood education in Afghanistan and opportunities for young girls are limited. Thomas died in an attack on the Serena Hotel in Afghanistan in March 2014.

River Sidley of Rossland, B.C., passed away suddenly on December 9, 2014, at the Bamfield Marine Science Centre. He was in his fifth year of a bachelor of science degree. His degree was conferred posthumously on Friday morning during Convocation ceremonies for the Irving K. Barber School of Arts and Sciences. The River Sidley Memorial Scholarship Fund has been established in his memory, supporting an annual award for a fourth- or fifth-year student from UBC Okanagan applying to the Bamfield Marine Science Centre (http://memorial.supporting.ubc.ca/river-sidley) 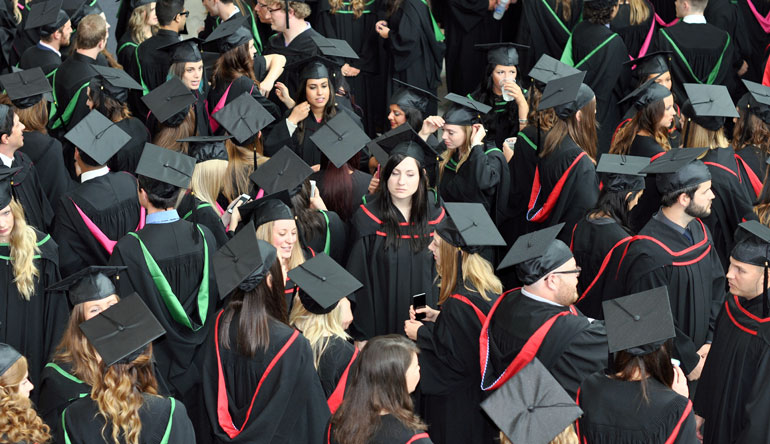 A sea of students wait to line up for their graduation ceremony at UBC’s Convocation. 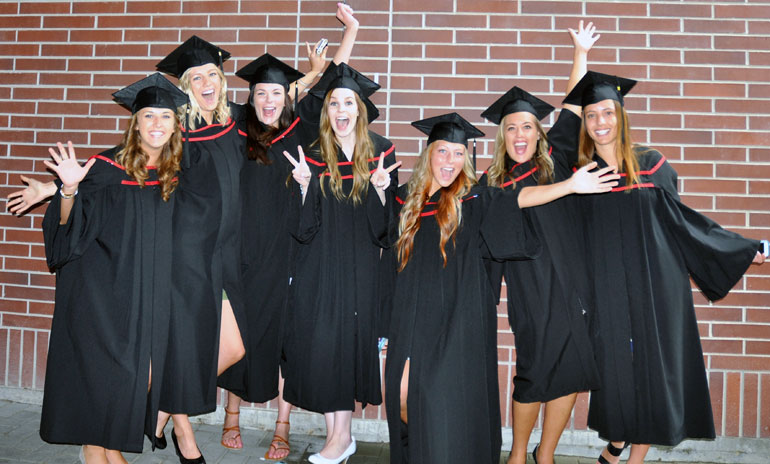