Time with his dying father leads to new book, and profound new quality of life 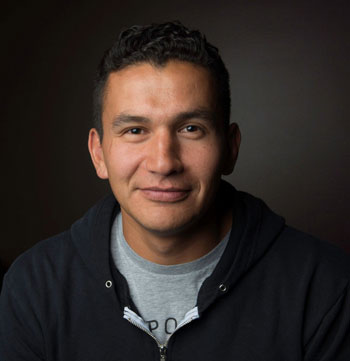 Award-winning musician, journalist, and writer Wab Kinew will talk about his new book The Reason You Walk when he visits Kelowna September 30. Kinew is the next speaker in UBC Okanagan’s Distinguished Speaker Series. Photo courtesy of: Katelyn Malo

A celebrated journalist, writer, musician, and hip-hop artist Wab Kinew knows what it’s like to be at a major crossroads in life. Growing up, initially on a reserve in northern Ontario and then in the inner city of Winnipeg, Kinew could have become a victim of circumstance and his family’s history. His father was raised in a residential school; stories of abuse, rape, alcoholism, and brutality were the constant shadows of his family’s background.

Kinew’s path could have taken any direction. He made mistakes. But he also asked questions. And he expected changes. When those didn’t come, he made his own changes and began speaking out about why Aboriginal people are treated differently than non-Aboriginals.

Already successful in his career, Kinew decided to spend time reconnecting with his dad shortly after his father was diagnosed with cancer. His book, The Reason You Walk, is the result of that time together and the conversations and healing that took place. This chapter in his life will be the main topic of Kinew’s talk when he visits Kelowna as part of UBC Okanagan’s Distinguished Speaker Series September 30.

Talented, passionate and smart, Kinew — who has a degree in economics — has become an accomplished journalist and a motivational speaker. He helped produce and host the acclaimed CBC series 8th Fire, has hosted Canada Reads, is an Aljazeera America correspondent, and at the same time is the Associate Vice-President of Indigenous Affairs at the University of Winnipeg. His hip hop music has won an Aboriginal People’s Choice Music Award, his journalism has won accolades, and he’s been nominated for a Gemini. Postmedia News has called him one of “nine Aboriginal movers and shakers you should know.”

Kinew will speak at the Kelowna Community Theatre, 1375 Water Street on Wednesday, September 30 at 7 p.m. His visit is part of the UBC Okanagan’s Distinguished Speaker Series which is presented by the Irving K. Barber School of Arts and Sciences. This event is free and open to the public, but pre-registration is required.

The Reason You Walk will be published this fall and UBC’s Bookstore plans to provide the book for sale at the event.

The Distinguished Speaker Series brings to the Okanagan compelling speakers, with unique perspectives on issues that affect our region, our country and our world. The theme of the series is A Civil and Sustainable Society.