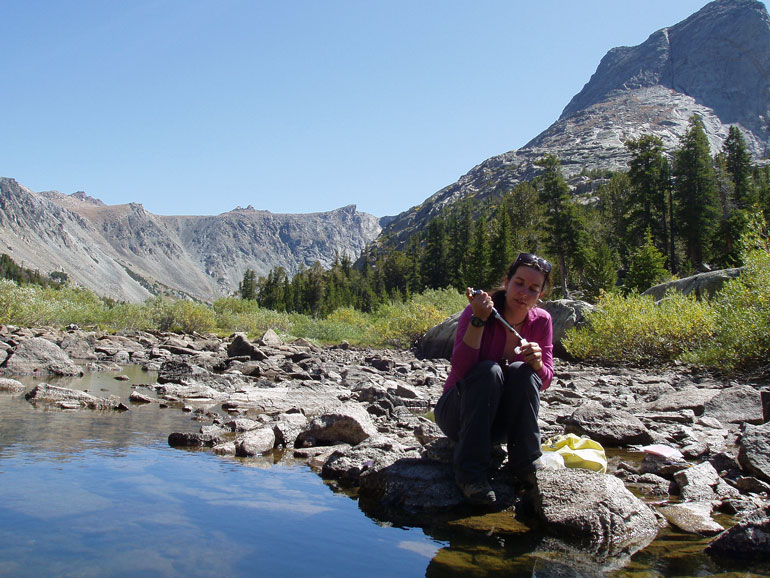 A researcher at UBC’s Okanagan campus says a recent analysis of hundreds of alpine lakes around the world show an alarming increase in phosphorus pollution.

What’s concerning, says Janice Brahney, is that the phosphorus is getting into these pristine and remote lakes by atmospheric deposition — travelling through the air unmonitored and without regulations.

Brahney, who earned her PhD in Geological Science from the University of Colorado under Dr. Jason Neff, is currently a post-doctoral researcher with the Irving K. Barber School of Arts and Science’s Earth and Environmental Sciences department. She has been part of a research team studying phosphorus pollution and other key nutrients found in more than 700 alpine lakes in 21 regions around the world. These lakes include sites in Canada and the United States, as well as in South America, Europe, Africa, and India.

The team has noticed a significant increase of phosphorus pollution in alpine lakes. Because the lakes are high altitude and in hard-to-get-to areas, researchers can determine that phosphorus and other pollutants are getting into the water via atmospheric deposition.

“Phosphorus pollution was a big problem in the 1970s and 1980s when human phosphorus sources were found in watersheds around the world,” says Brahney. “Once it was recognized as a problem, effluent regulations were established to help clean up the aquatic environment. But now phosphorus is being transported in appreciable amounts through our atmosphere.”

Their research, published this week in Global Biogeochemical Cycles — a scientific journal for the American Geophysical Union, should be a wake-up call for global scientists, Brahney adds.

“The atmospheric component of this pollution is much harder to manage than in contained watersheds,” says Brahney, noting that political and geographic borders cannot stop pollutants. And she says while some organizations like the United States Forest Service have taken note, not enough attention has been drawn to this matter.

“There is more and more evidence piling up that atmospheric phosphorus pollution is a problem and even though our research is getting some attention, more needs to be done.”

Brahney says there are two major issues with atmospheric deposition of phosphorous. The first being it is not currently monitored. The second, managing a global issue that crosses international borders. She is hoping the research paper will bring more attention to the issue and wake up the global community.

“At the very least, this is an environmental process that needs to be measured and monitored,” says Brahney. “Atmospheric phosphorus pollution is largely due to human activity, and it’s something that we should not ignore.”