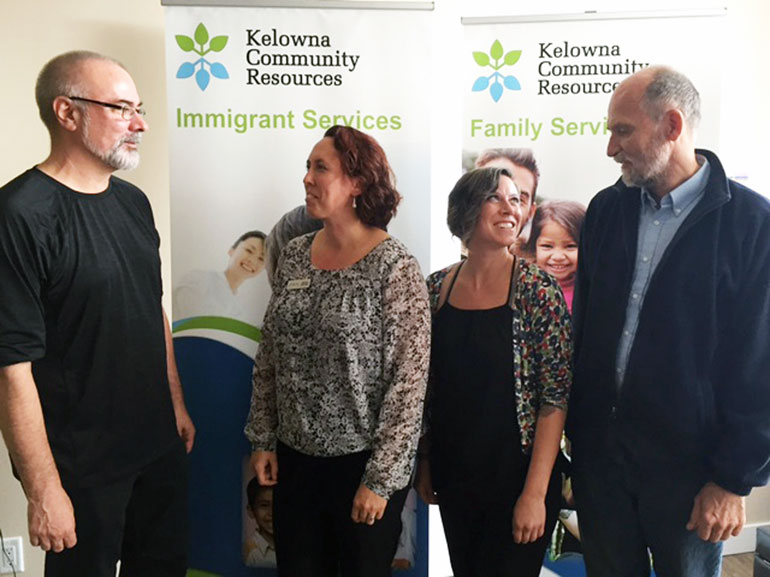 A community symposium on immigration in Canada takes place at Okanagan College and UBC Okanagan Friday, September 25, and Saturday, September 26. Mike Evans, left, Katelin Mitchell, Robyn Bunn, and Keith Mitchell are a few of the community partners who have helped organize the symposium.

UBC’s Okanagan campus is facilitating a community discussion on issues faced by foreign workers living in Canada and refugees trying to get here, says UBC Okanagan’s Director of the Institute for Community Engaged Research and Professor of Anthropology Mike Evans.

“In discussions with our partners, we are seeing a recurring theme that our country’s immigration policies are causing challenges for community groups who support asylum seekers and assist foreign workers in accessing the supports they need,” says Evans. “We look forward to facilitating the symposium, which will review concerns and open a discussion of what can done be about them.”

A number of groups will be at the symposium, including UBC Okanagan, the Catholic Diocese of Nelson, Radical Action with Migrants in Agriculture (RAMA), and Kelowna Community Resources.

Discussions will cover a number of related topics, including difficulties in sponsoring asylum seekers trying to get to Canada, helping migrant workers have access to supports such as health care, and ensuring that new Canadians have access to the services they need to integrate into their new community.

“It’s becoming very difficult, if not impossible, to sponsor refugee families from countries like Iraq and Syria to come to Canada in a reasonable amount of time,” says Keith Germaine, representative of the Catholic Archdiocese of Nelson, which holds a sponsorship agreement with the Government of Canada. “The current policies of the federal government have increasingly focused on what economic benefit immigrants can bring to Canada, and have all but forgotten the humanitarian aspects of immigration.”

“Since 2008, Canada has accepted more temporary foreign workers than permanent residents, which reflects a decades-long shift towards the creation and maintenance of a large pool of precarious, non-citizen workers who have fewer rights and freedoms than citizen workers,” says Robyn Bunn, speaking on behalf of the RAMA collective. “These migrant workers are employed in many areas ­­­– including caregivers, farmworkers, cashiers, and truck drivers – and are excluded from pathways to citizenship and often deported to face detention and persecution in their home countries.”

The Immigration Symposium takes place September 25 and 26 at UBC Okanagan and Okanagan College in Kelowna.

“As an organization that works to ensure that new Canadians feel welcome and are aware of the services and supports available to them, we look forward to participating in the Immigration Symposium,” says Katelin Mitchell of Kelowna Community Resources. “The symposium promises to see good discussion and perspectives of how Canada is doing with regards to immigration and create solution focused opportunities for the community to work together to address these issues.”

People interested in learning more or signing up for the Immigration Symposium can visit immigrationsymposium2015.eventbrite.ca or contact icer.ok@ubc.ca