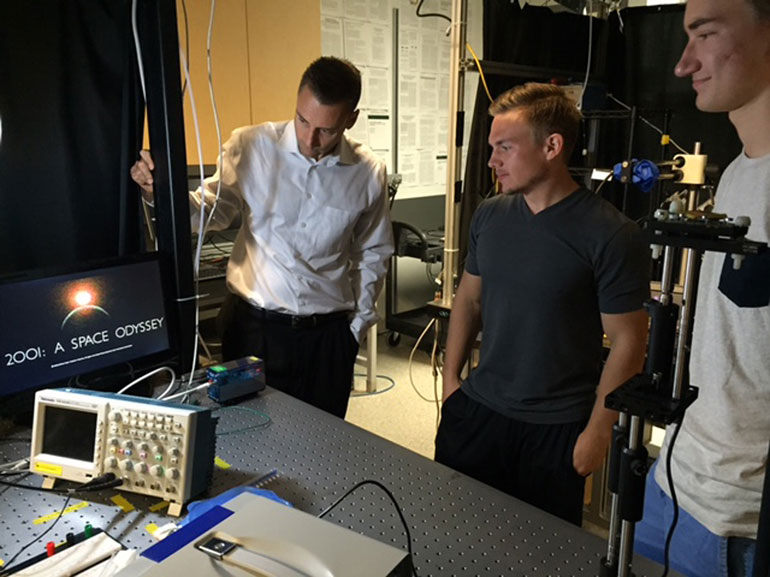 Assoc. Prof. Jonathan Holzman, left, and students Brandon Born and Jeff Krupa view 2001: A Space Odyssey on a laptop that is connected to a computer on the other side of Holzman’s lab via laser beam.

Nano-photonics research could lead to faster Internet and computing speeds

People interested in faster computer and Internet speeds should take note of research coming out of labs at UBC’s Okanagan Campus.

Researchers within UBC’s School of Engineering have concluded that photonic nanojets — essentially nano-scale high-intensity beams of light — may be the key for future optical computation and communication technologies.

These nanojets focus light in the form of an intense “afterburner,” as Assoc. Prof. Jonathan Holzman calls it, and this makes it possible to carry out optical switching at very low laser energies and incredibly high speeds. These are the basic characteristics that are needed to introduce a new generation of optical computers, for direct integration with fibre-optic systems.

“There are some challenges with fibre optics. Data in fibre-optic cables must be processed by electronic switching, and that really slows things down,” says Holzman, who teaches electrical engineering. In response to this, the group has put forward key advancements in optical switching. The use of optical technology lessens the virtual speed bump that forms when high-speed data in a fibre-optic cable hits electronic components such as switches, routers, or computers.

In his lab, Holzman often demonstrates how the optical data can be transferred by playing 2001: A Space Odyssey on one computer and routing it to another via laser beam instead of a conventional cable.

What the research could lead to, says principal investigator and UBC Okanagan PhD candidate Brandon Born, is advancements that could “revolutionize the Internet.”

Born says further work involving this research could contribute to the development of all-optical switches, as opposed to electronic switches, and this could lead to data transfer rates that are thousands of times faster than what is currently available.

“It’s this, then routers, then interfaces with computers and eventually the mythical optical computer … we could release the electronic bottleneck,” says Born, who adds that they are looking forward to sharing their findings with researchers in other parts of the world.

Also participating in the research were undergraduate students Jeff Krupa and Simon Geoggroy-Gagnon.

The group’s research was featured in the September edition of Nature Communications.