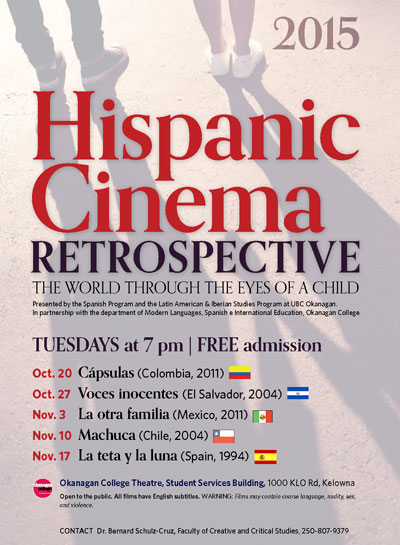 The lineup for the annual Hispanic Cinema Retrospective is set and the films are ready to roll, starting Tuesday, October 20.

The Hispanic Cinema Retrospective 2015 is presented, free of charge, by UBC Okanagan’s Spanish Program and the Latin American and Iberian Studies Program in partnership with the department of Modern Languages, Spanish and International Education, at Okanagan College.

“What makes this festival of movies unique is the films are made in Latin America and Spain or have Hispanic themes,” says UBC Assoc. Prof. Bernard Schulz-Cruz. “This year the films focus on the world as seen by children.”

Through the eyes of children, the movies will depict a range of subjects from political struggle to dark comedy, mirroring the tumultuous changes experienced by Latin Americans and Spaniards over the last decades.

“This festival is an opportunity for viewing perspectives that are hard to come by through general commercial films, the difference in aesthetics making this retrospective of Hispanic cinema a refreshing change from the ordinary,” says Schulz-Cruz, who teaches Spanish with UBC Okanagan’s Faculty of Creative and Critical Studies.

Schulz-Cruz notes the series of five events on consecutive Tuesdays satisfies the academic and cultural needs of students and colleagues, but it also creates a bridge between the wider community of Kelowna and UBC Okanagan and Okanagan College.

“The Hispanic Cinema Retrospective promotes our academic schools as pluralistic institutions, concerned with international affairs and contributing to the cultural and artistic life of the city,” he adds. “Altogether, the films will entertain the public and open new windows to a multicultural vision of the world.”

All Hispanic Cinema Retrospective screenings are presented with English subtitles. Films may contain coarse language, nudity, sex, and violence. All films are shown in the Okanagan College Theatre, Student Services Building, 1000 KLO Road, Kelowna. Movies begin at 7 p.m. and are free and open to the public.