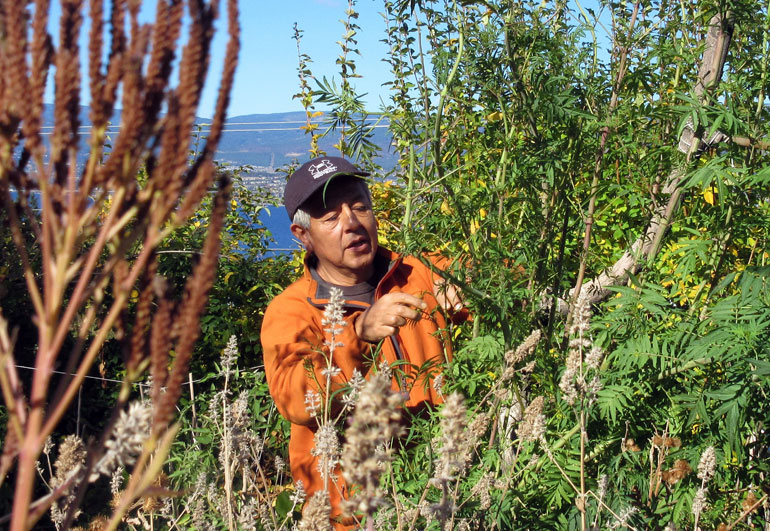 In an organic garden near Summerhill Pyramid Winery, Tirso Gonzales looks over a variety of plants including catnip, mint, nettle, and mustard that grow unfettered in a friend’s sanctuary. Photo credit: Gabe Cipes.

For Tirso Gonzales, an associate professor at UBC Okanagan, the problems with the western world’s way of farming are clear. Current practices such as monocropping, pesticide use, and only using a select group of plant species are solely profit driven and unsustainable.

These practices have largely ignored agricultural knowledge of more than 1.2 billion indigenous people and small farmers around the world, knowledge that will be the topic of discussion when Gonzales attends the second Indigenous Terra Madre (Mother Earth), a world conference on the subject in Shillong, India next week.

Running from November 3 to 7, the Terra Madre will see indigenous representatives from around the globe attend, and will include discussions, workshops and solution seeking sessions on how indigenous agricultural knowledge systems can be better used in local communities as well as on the world stage.

“The dominant Euro-American view of food production is colonial in nature and has fundamentally ignored and disavowed the sustainable agricultural practices employed by indigenous peoples for thousands of years,” says Gonzales, who teaches Indigenous Studies with UBC Okanagan’s Irving K. Barber School of Arts and Sciences. “This is actually part of a larger issue that sees the dominant Western view of the world overshadow experiences of other cultural groups, many of whom possess the knowledge necessary to help address some of the world’s most pressing issues.”

Gonzales’ work is well known in indigenous and non-indigenous academic and intellectual circles. A former Fullbright scholar with a PhD in sociology, Gonzales has conducted research on behalf of the World Bank and United Nations Food and Agricultural Organization. His work examined how science, technology, and indigenous knowledge systems can be used to reduce hunger and poverty, improve rural livelihoods, and environmental resilience, and also promote efficient ways of producing food while at the same time demonstrating care for the environment, societies, and economies.

“India is just one step in my journey, I am travelling light these days,” says Gonzales, who has dedicated his career to the study of Latin American Indigenous Studies, an area of study that remains largely unrecognized, misunderstood, and unfunded in academic communities across the western world.

In many indigenous areas of study, in particular Latin American Indigenous Studies, history and academic knowledge seeking is selective and approached with a Euro-American view as opposed to a decolonial view from those, like Gonzales who comes from the Peruvian Andes and is related to the Aymara people, whose ancestors lived that history.

“The physical presence of colonial powers of old Europe has actually disappeared, but their legacy —coloniality of knowledge — in the way the world thinks, acts, and what it values remains. Coloniality is not over. It’s all over,” says Gonzales. “We have moved on from a Eurocentric view of the world to a Euro-American view. This is the prime reason why we are still effectively ignoring the experiences of millions of people whose place-based knowledge, history and experience will be integral in solving many of the world’s problems.”

For more information on the event, visit: shillong2015.indigenousterramadre.org.