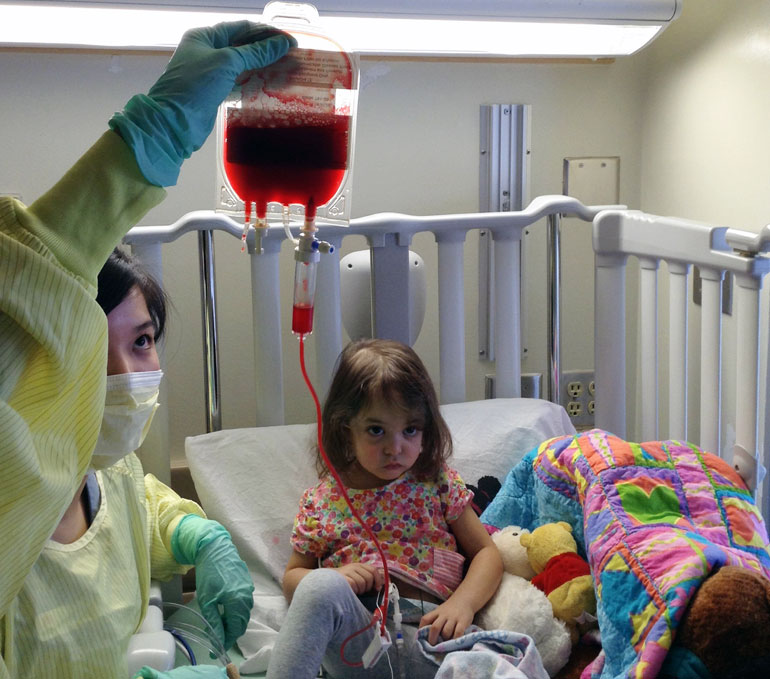 For most people, having 26 million options to choose from would seem like good odds. For Kelowna’s four-year-old Nadia Bjarnason and her family, those odds were not quite enough.

Nadia was born with Dyskeratosis Congenita. It’s a genetic disorder that affects one in one million people, can cause premature aging or cancer, and requires a stem cell transplant to treat. After being diagnosed at an early age, Nadia and her parents, Tara Beehary and Thor Bjarnason, began their crash course on the importance of countries building and maintaining blood and stem cell donor registries.

“Because Canada is so ethnically diverse, it’s very important for people to become recognized blood and stem cell donors so we can widen the diversity of the registry,” says Beehary. “Finding a match is like finding a needle in a haystack, and for us, it was a matter of life and death.”

After being diagnosed, doctors told Nadia’s family that she would need a stem cell transplant that would come from an unrelated, volunteer stem cell donor. Suitability is dependent on genetic compatibility and is heavily influenced by the donor and the recipient’s ancestral background.

“There were 26 million stem donors registered worldwide that Canada had access to, and there wasn’t a suitable match as Nadia has a mixed ethnic background,” says Beehary. “In the end, we found a suitable match through a cord blood registry (a database that catalogues voluntary donations of umbilical cord blood) and we were able to find a match.”

In the end, it’s a numbers game. Having a larger registry, comprised of young, ethnically diverse registrants will improve the chances of finding a match, which is why Beehary and her family were glad to hear about a donor clinic that was held at UBC Okanagan earlier this week. The clinic attracted over 80 students, staff, and faculty who rolled up their sleeves.

“We have such a large pool of potential donors here on campus,” says Warren Brock, UBC Okanagan Partners for Life Representative. “It’s great to see more and more of the UBC community getting involved each year.”

As the population grows, so does the need to expand the country’s blood and stem cell registries and access to suitable donors, says David Patterson, director of donor relations, B.C. and Yukon region.

“Every 60 seconds, someone in Canada needs blood, and blood has a limited shelf life so demand is constant,” says Patterson. “The need for blood and stem cells goes hand-in-hand, and we urge everyone to continue helping Canadian patients by donating regularly at the blood donor clinic in Kelowna.”

There are a number of opportunities to donate blood in the Kelowna area, including the permanent Kelowna donor clinic located at 103-1865 Dilworth Drive. The permanent clinic is open Mondays, Tuesdays, Thursdays, and every other Saturday.

According to Canadian Blood Services, although about one in two Canadians are eligible to give blood less than four per cent of eligible donors donate blood each year. Blood is used for a variety of applications, including transfusions for accident victims and people undergoing surgery. Stem cells are used to treat some 80 diseases, including leukemia, lymphoma, and various immune and blood diseases.