First-year student selected to play the bagpipes at official event

Professors and students, rushing to classes, stop, listen, and offer applause once Crooks finishes. It wasn’t so much the bagpipes that stopped people in their tracks, but more so the song Crooks plays — ACDC’s Thunderstruck.

This 18-year-old student isn’t your typical bagpipe player and she scoffs at any stereotypical images of the old boys club or kilted senior citizens playing wind instruments. Crooks, a first-year student with UBC Okanagan’s Irving K. Barber School of Arts and Sciences, has plans to major in physics and hopes to become a neurosurgeon. For now, she’s content attending classes and getting good grades while she works towards her undergrad degree in science. And playing the bagpipes with the Kelowna Pipe Band Society.

Crooks began playing the bagpipes five years ago when she was with the cadet program — her options were shooting or the band. She progressed quickly to the bagpipes and likes the fact that it’s a unique instrument with a sound all its own. Learning to play the bagpipes has a steep learning curve and Crooks says when you stop learning, it’s time to stop playing the instrument. Last week, she learned to play Thunderstruck, hence the on-campus practice session.

Crooks, who has already played at one event at UBC Okanagan this fall, will be the official piper at the university’s Remembrance Day ceremony on Monday, November 9.

“As World Wars I and II become more distant in our memory, it becomes increasingly important to pay homage and respect to those who fought for the freedom of our nation,” says Crooks. “As a bagpiper  — and a UBC Okanagan student — I am deeply humbled and honoured to aid in the continuation of a cultural ceremony as important as Remembrance Day.”

UBC’s Remembrance Day service takes place in the courtyard and is open to the public. UBC Okanagan administrators along with Royal Canadian Legion guests will speak briefly about the importance of Remembrance Day in Canada. The traditional two minutes of silence, along with a bugle reveille and bagpipe lament, played by Crooks, will be part of the formal service.

A number of other UBC Okanagan students will be involved in the ceremony including Tom Macauley, Nika Amft, Layne Richardson, and Chantel Bennett, who will recite poetry, student speaker Celine Edwards,  the acapella group UBCO Beats, who will sing O Canada and God Save the Queen, and Lieutenant Josh Trowsse-Freeman and Corporal Cody Lauterbacher, British Columbia Dragoons.

After the formal service, a reception in the Arts Building foyer will take place. The public is encouraged to attend this service that begins at 10:45 a.m. on Monday, November 9. Pay parking is available on campus. 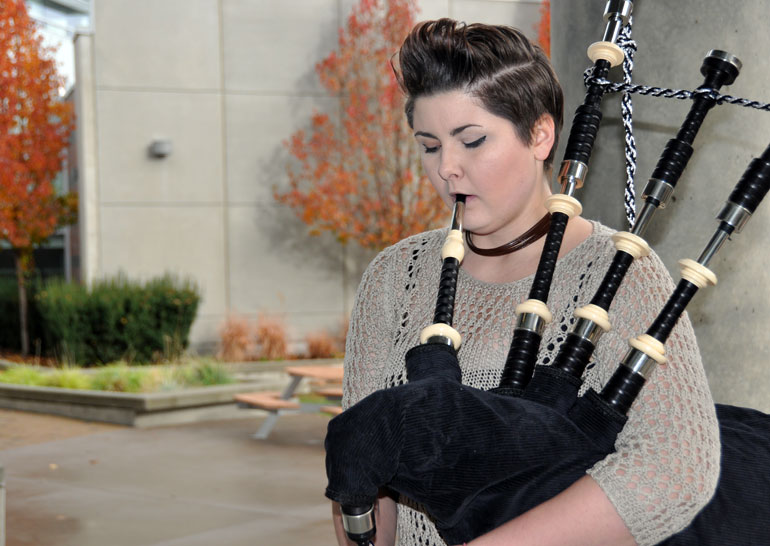