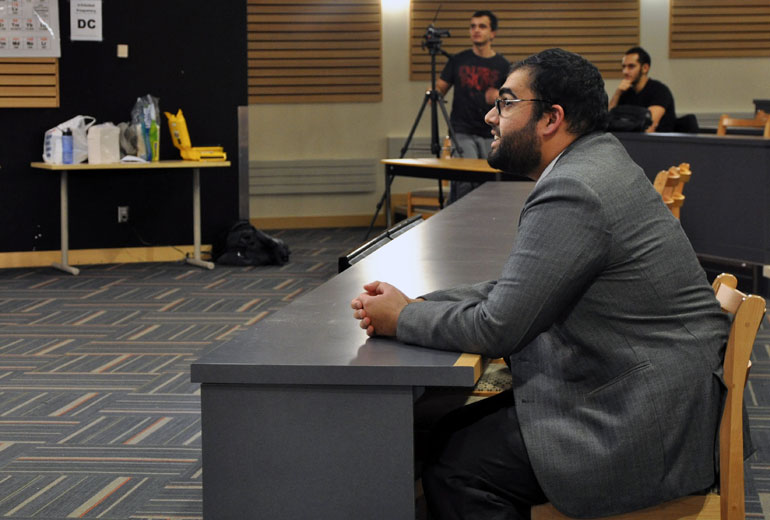 Adnan Bhat listens while Shaykh Navaid Aziz, a chaplain and youth counsellor from Calgary, answers questions during the “Misconceptions about Islam” event held at UBC Okanagan this week.

Bhat has been successfully bridging the gap between Muslims and non-Muslims on the UBC Okanagan campus and in the community.

“Our goal was to get the Muslim community to engage and interact with non-Muslims,” says Bhat, who has completed a master’s degree in electrical engineering and is head of the Muslim Student Association (MSA) at UBC Okanagan. “The plan was to first get Muslims to interact more on campus, and then eventually in the Kelowna community.”

Bhat has organized events such as “Meet a Muslim” where a booth was set up in downtown Kelowna. During the event, he received a mostly positive response, but also fielded questions he believes stem from misconceptions about Muslims.

He was motivated to organize “Misconceptions about Islam,” an open question-and-answer forum on campus this week, where the community and UBC students were invited to ask questions and interact with Shaykh Navaid Aziz, a chaplain and youth counsellor from Calgary.

“For a lot of people, its taboo to talk about religion, but disagreeing shouldn’t stop us from being nice to one another,” says Aziz.

The event attracted more than 100 people. Muslims and non-Muslims asked Aziz hard-hitting questions such as, “why should I trust your interpretation of the Quran, versus Isis’” and “how do Muslims treat homosexuals?”

Bhat believes that stopping the misconceptions, and opening the lines of communication starts with open forums, like the one held on campus.

More can be achieved, Bhat says, if student groups work together and form partnerships. Bhat partnered with UBC’s Equality and Inclusion Office for this event and says he’s attended “Rule out Racism” workshops hosted by UBC Okanagan in the past.

The MSA has more than 250 members, and Bhat says any student is welcome to join. The group hosts daily prayers, talks, lectures, and social events such as dinner parties and soccer nights.

“Our soccer nights are famous,” says Bhat. “We have more than 50 participants every week.”

For more information about the Muslim Student Association, visit its Facebook page or email: msa.ubcokanagan@gmail.com