Student bounces from gym to lab to class to international competition

When UBC engineering student Trevor Stirling talks about a Miller plus, don’t be thinking it has anything to do with a beverage.

Stirling, who is in his third year of electrical engineering at UBC’s Okanagan campus, is heading to the world trampoline championships taking place in Denmark next week. The young athlete, a Kelowna Secondary School grad, has been bouncing on a trampoline since 2007, and will represent Canada in the men’s single competition.

A Miller plus (named after American gymnast Wayne Miller), is the official name of one of several jumps that Stirling does during his trampoline routine. It’s a double backflip, with a couple of double full twists thrown in for good measure. Because gymnastics is still a subjective sport, marked by a panel of judges, the tougher and more complex the routine, the higher the point count will be for the 20-year-old athlete.

For Stirling, who spends his days in the labs and classes at UBC’s Okanagan campus, there’s a science behind the competitive aspect of the trampoline. And his analytical, scientific mind can transfer that science into the sport to help improve his routine.

“I can think about the conservation of angular momentum while I’m jumping and I can use that to figure out how to get more flip,” he explains. “And when I’m in the gym working on the trampoline that takes my mind off my studying.”

Stirling spends five nights a week at the gym, and carrying a full course load of six upper-level credits means he has a heavy academic schedule. But, he likes to be challenged and has high ambitions — in the gym and in the classroom.

Jonathan Holzman, associate professor in the School of Engineering, says Stirling is at the top of his class and comes across as a disciplined and remarkably humble student. Holzman runs the Integrated Optics Laboratory at UBC Okanagan and Stirling is on his research team — working on terahertz generation and spectroscopy (experimenting with the different frequencies of light and comparing those with the frequencies of electrons).

“Trevor personifies excellence. He excels in academics and athletics,” says Holzman. “And he has put forward major contributions to our research on terahertz technology. He truly is one of our nation’s rising stars.”

While he will represent Canada at the World Trampoline and Tumbling Championships next week, Stirling knows the competition is top-notch. It’s literally the best in the world. He has no grand illusions about winning it all.

“This competition is a qualifier for the Olympics and the top eight will get a spot,” he says. “Even now I know it’s not a possibility for me in 2016. I’m aiming to score about 100 points this competition, and I know I’ll be a bit behind the leaders who will probably earn about 110.”

While competing in Odense, he will also soak up the atmosphere of the international competition.  He has been competing for years, first as a junior, and each international event is a chance to watch the world’s best athletes, learn from them, and improve on his own skills. And he will come back from the world finals just in time for the first-semester final exams. That’s his reality.

“I have had to miss a lot of school and the professors have been really good about supporting me,” he says. “They know, when I’m not in class, I’m competing somewhere.” 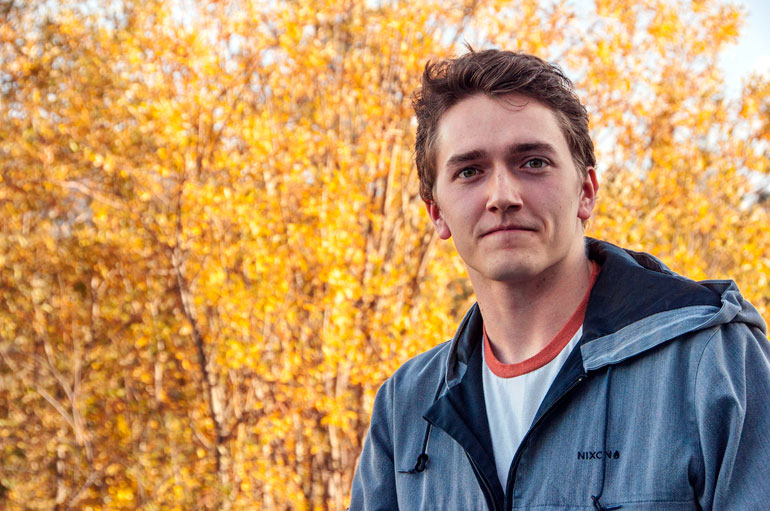