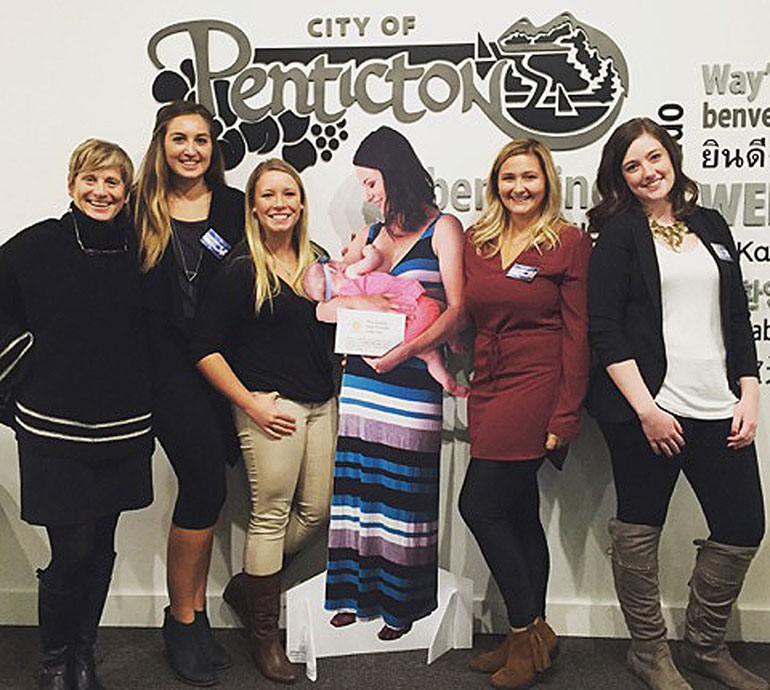 A group of fourth-year nursing students at UBC’s Okanagan campus has aligned with the City of Penticton to be “baby friendly.”

The students made a formal request to Penticton city council earlier this month, presenting their Baby Friendly Community Initiative, similar to that of the World Health Organization’s.

“Breastfeeding in public isn’t an issue in many parts of the world, but in North America our culture tends to view breasts as sexy more than a method of feeding babies,” she says. “Therefore, when some people see women breastfeed, they may become uncomfortable or offended because it is different from the cultural norm. Our culture is changing when it comes to breastfeeding and it’s definitely better than it used to be.”

But still, every year a media story emerges about a woman being asked not to breastfeed in public, or being asked to cover up while she feeds her baby. Fellow student Jamie Towert says she can’t ever recall hearing about women who bottle feed their babies being asked to stop because it is offensive.

“It should be the same for all mothers,” says Towert, “whether they choose to bottle or breastfeed their infants.”

The Canadian Pediatric Society recommends exclusive breastfeeding for the first six months of age and up to two years.

The UBC nursing students approached Penticton as part of their Engaging in Leadership class project. In past years, Lake Country, Kelowna, and West Kelowna adopted the Baby Friendly Community Initiative. The students selected Penticton as it is geographically next on the list; it has been recognized as a welcoming community for families by Today’s Parent magazine; and is one of the top entrepreneurial B.C. communities, according to the Canadian Federation of Independent Businesses.

Student Paige Bunbury says young entrepreneurs may be attracted to Penticton because of this acknowledgement, and they may be more interested in moving to the community if they knew it supports the Baby Friendly Community Initiative.

As part of the agreement, the city can display the international Breastfeeding Welcome Here logo on city-owned buildings and in promotional materials. City staff will display a welcoming attitude to breastfeeding mothers and be oriented to the BC Human Rights Code that protects breastfeeding in public.

“It’s about acceptance of all mothers,” she says. “All communities need to have a positive breastfeeding culture and women who breastfeed should not feel discriminated against.”

While the group is glad that Penticton was so responsive, they hope it doesn’t end there. They hope that future fourth-year nursing students expand on the Baby Friendly Community Initiative by approaching nearby cities and influencing them to all become “baby friendly.”

According to Statistics Canada, there was a four per cent increase in the number of mothers who reported breastfeeding (from 85 per cent to 89 percent) between 2003 and 2012, with the highest rate of breastfeeding occurring in British Columbia.

The majority of mothers who were reported to have breastfed exclusively for the first six months of their child’s life, according to Statistics Canada, tended to be in their thirties or older and held post-secondary qualifications.