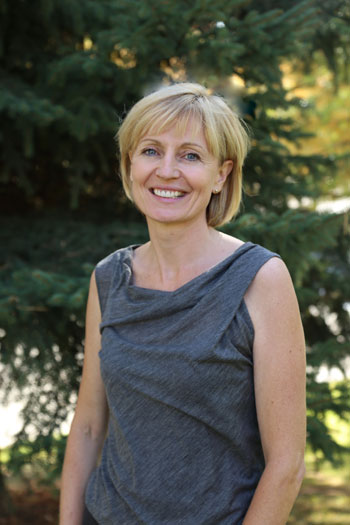 In an age of TVs, touchscreens, and tablets, Canadian children are spending more and more time riding the couch than their bikes.

While it’s well known that moving less and eating more has led to expanding waistlines, recently published research by UBC Assoc. Prof. Ali McManus is showing that this lifestyle can harm the health of the blood vessels in younger girls.

“Human beings do sit, but we are not designed to sit as much as we do today,” says McManus, who teaches health and exercise sciences at UBC’s Okanagan campus. “From the time of cavemen we’ve genetically evolved to move, and it’s only recently that we’ve engineered so much sitting into our lives.”

Recently published in Experimental Physiology, McManus’ research measured the dilation of blood vessels in the legs of seven-to-10-year-old girls following periods of prolonged sitting, as well as times where those periods were broken up with exercise.

Results showed that prolonged sitting led to a 33 per cent reduction in dilation of arteries in the legs, impacts that were mitigated when the exercise component was present. Reduced dilation of arteries has been shown to lead to higher blood pressure and various cardiovascular issues in adults.

McManus plans to continue her research by examining the impacts that prolonged sitting may have on children’s brain blood flow and cognitive functioning.

Increasing the amount of scientific data on the negative impacts of sedentary living can only improve the chances that Canadians will seek real change in an issue that is severely impacting the health of children, says Dr. Tom Warshawski, chair of Canada’s Childhood Obesity Foundation.

Warshawski, who also heads up pediatric care at the Kelowna General Hospital, says more must be done to steer kids away from TV and computer screens and into unstructured physical activities. This could help kids get active and establish life-habits that may help avoid current and future health issues associated with sedentary lifestyles and weight gain.

“The more information we can get, the more we can make an ironclad case to parents and policy makers to help change the trends,” says Warshawski. “Our school policies around physical activity are not adequate and parents often feel that exercise and academic performance are mutually exclusive.

“The data of the positive health impacts of exercise is unequivocal; if you put exercise in a pill you’d have the miracle drug.”

Gathering further evidence that exercise can actually improve children’s ability to study could be just the nudge that is needed for positive change, adds Warshawski.

According to the 2015 report card on physical activity of children and youth released by ParticipACTION Canada, Canadian children exceed recommended guidelines for sedentary behaviours, as well as recommended limits for time in front of computers and TV screens.

The report card shows that while 70 per cent of kids aged three to four get the recommended amount of daily physical activity, those rates drop to 14 per cent for kids aged five to 11, and drops further to five per cent for youth aged 12 to 17.

According to the report, while every Canadian province offers physical education (PE) curriculum, only Manitoba has a mandatory PE credit every year of high school.