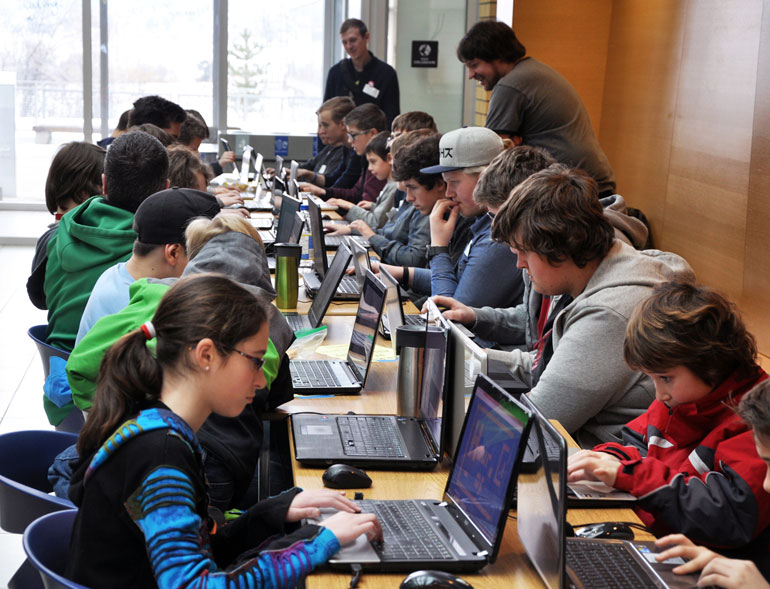 More than 100 elementary and high school students are one step ahead of their counterparts after spending a day of computer coding at UBC’s Okanagan campus Saturday. Coding, Premier Christy Clark announced last week, will become part of the overall K-12 curriculum redesign being phased in over the next three school years.

Saturday, UBC Okanagan, in partnership with Codecreate, hosted more than 100 students in an effort to promote an Hour of Code — a grassroots global science and digital literacy awareness campaign aimed to encourage students around the world to try computer coding. Events happened simultaneously across the province, creating the largest province-wide youth coding event that B.C. has seen to date.

“Kelowna’s technology sector is booming, and it’s never too early to start learning the basics of coding,” says Clark, MLA for Westside-Kelowna. “Events like Codecreate help students explore computer programming, and maybe start them on a path towards a great career.”

During Saturday’s event at UBC Okanagan, high school and elementary students were tasked with basic computer coding activities. Curriculum and instructions were provided by Lighthouse Labs, and tasks were completed with support from volunteer coding mentors from the university and the community.

“Coding is quickly becoming an essential skill, alongside reading and writing,” says Deborah Buszard, UBC Deputy Vice-Chancellor and Principal of the Okanagan campus. “Codecreate is an outstanding example of Okanagan communities coming together with UBC to position the next generation of learners for success in the economy of the future.”

“Understanding the deeper meaning of how coding relates to everyday life will be beneficial to any student trying to grasp how the world works,” says Peatland.

The UBC event follows similar workshops that have taken place in Vancouver, Victoria, and Prince George, where up to 400 students have learned to code.

“Events like these help spark students’ passion and interest in computer science and tech-related career options, which are so significant in our region,” says Steve Thomson, MLA for Kelowna-Mission. “A big thank-you to UBC Okanagan for hosting such an informative and engaging event for our young people.”

Mayor Basran, a champion for the growing Okanagan technology sector, offered opening remarks to the students and volunteers.

“It is so important in this ever-changing world to maintain a commitment to innovation and life-long learning,” he says. “We’re fortunate in Kelowna to have a world-class institution like UBC Okanagan bringing innovative teaching opportunities like Codecreate to our entire community.”

The introduction of coding to school curriculum and the promotion of its importance through Codecreate is supported by a number of community members, including Norm Letnick, MLA for Kelowna-Lake Country.

“When I took my B.Comm from 1977-80, we were required to take five courses in computer science —and those programming skills helped me launch two successful businesses and a career in computer sales, custom programming, and support,” says Letnick. “By adding computer coding to B.C.’s K-12 curriculum, we hope to get more young people interested in careers in technology.”